Theoretical physicist Dr. Casey Handmer has been fascinated with 3D printing, technology and space ever since he can remember. One of his endeavors has been to transform NASA’s publicly available data about the planet Mars into an elegant ring – and we met with him to talk about his project and why he turned to 3D printing to realize it. 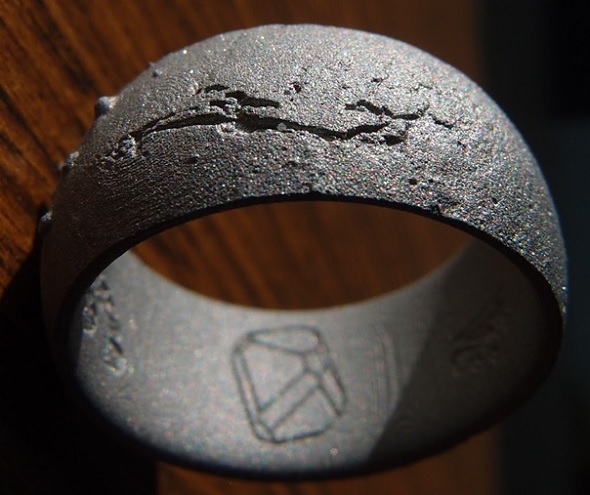 The Mars Ring: the view of Valles Marineris (surface) and a truncated hexa-octahedral magnetite, the strongest evidence that life originated on mars (inside).

Hi Casey! First of all, tell us a bit about yourself.

Hi, I’m Casey Handmer. I started 3D printing stuff when I was in grad school at Caltech, in Pasadena. Now I work for Hyperloop and I’m still designing 3D models. I am very interested in making wearable art with rigorous scientific data, as a means of science communication. I also try to push the boundaries of the medium, though high resolution 3D printing has come a long way since I did the Mars model. 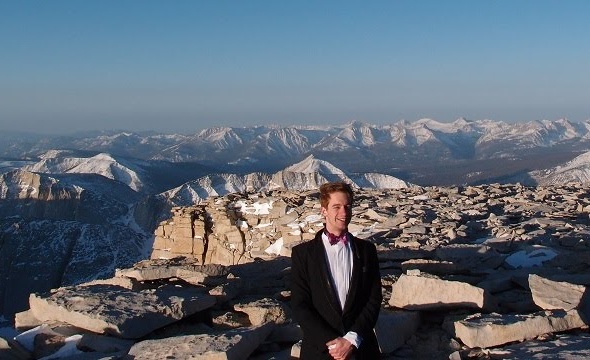 The designer of the Mars Ring: Dr. Casey Handmer.

Now let’s talk a bit about that Mars model. Why did you choose planet Mars?

Mars is a really interesting world covered in mountains and craters and canyons. You have to sacrifice the polar regions to make a ring, but fortunately there’s plenty of interesting stuff near the equator. Very few planets or moons are as well mapped or interestingly lumpy.

Sounds perfect for a 3D print. But where did you get the data from?

There’s an amazing dataset available for free on the Internet, derived from the Mars Orbital Laser Altimeter (MOLA) experiment on a NASA’s Mars Global Surveyor probe. The United States Geological Survey (USGS) is also a great source of geo data. It is terrific to be alive at a time when the results of publicly funded science are so available and the tools to represent that data are developing so quickly.

How long have you been working on this?

The initial model was completed in a few hours, but I spent a few weeks fine-tuning its design, getting the vertical scale right, ensuring it was comfortable, and getting the inside part right. I also printed a bunch of prototypes in bronze before switching to high detail stainless steel. 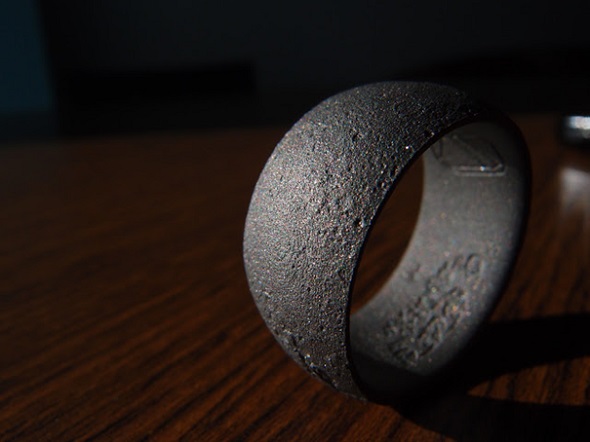 The Mars Ring: view of Xanthe and Margaritifer.

There are quite a few symbols on the inner side of the ring. How did you choose them?

I once read something pointing out that Mars was the only planet inhabited entirely by robots, so they were an obvious choice for the diagrams on the inside. That’s why the inside of the ring consists of engraved icons of the Mars Pathfinder rover (Sojourner), the Mars Exploration Rover (Spirit/Opportunity), and the Mars Science Laboratory (Curiosity).

I also experimented with a relief sketch of Mt Sharp in the Gale Crater, but it didn’t look right. Later, I added a diagram of a magnetite crystal because, in my opinion, their discovery in a meteorite from Mars is the strongest evidence we have that life actually originated on Mars. 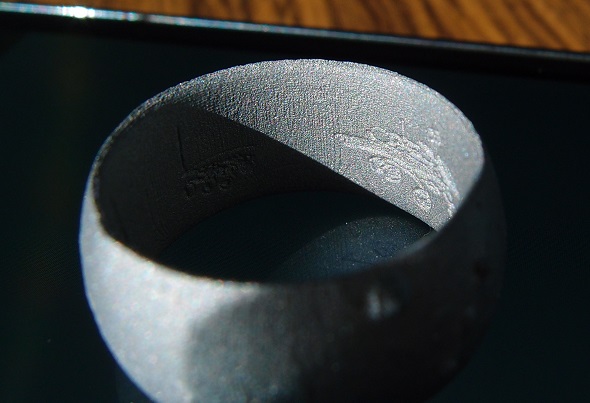 The Mars Ring: view of the Curiosity Mars rover (in light) and Pathfinder (in shade).

And are you planning any similar projects for the future?

I really like the Mars ring – I wear it every day. I have even used it for quick reference, such as when I was reading The Martian – the Watney triangle and Schiaparelli crater are visible. While I haven’t made any other rings of planets – I considered doing Europa (moon of Jupiter) but it’s very smooth – I did make a model of the Sierra Nevada mountain range in California. I have made lots of other models, usually as one-offs for friends.

In the future I would love to visit Antarctica. I think 3D printing is very well suited to capturing the stark, austere beauty of that mysterious place. It’s a lot warmer and closer than Mars but it’s still a long swim!

Now let’s talk a bit about the design process. When and how did you start with 3D modeling?

My first 3D model was a part for an RC helicopter that kept breaking due to a manufacturing flaw. The 3D printed part worked like a charm. Later, I decided to get a bit more technical and print some pilot’s wings for when I got my license. It was such a fiddly project it took months to finish when I should have been studying the Aviation Regulations!

And which software did you use to create the Mars ring?

I use a versatile software package called Mathematica. It’s not designed for 3D modeling but it enables really low-level control of the data-sets and point positioning. But I don’t know how to use it for efficient mesh refinement or annealing – my models rarely contain such things for a reason! 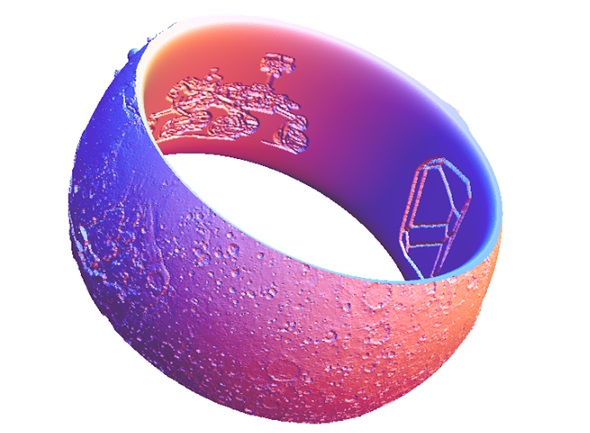 Early render of a prototype of the Mars Ring.

What was the biggest challenge in the design process?

The biggest challenge came during the prototyping process, where I was using bronze and had a great deal of difficulty getting consistently excellent prints when working with another 3D printing service. The team at i.materialise has always been supportive and responsive, which I have found encouraging as I try to design shapes that seem impossible!

Thanks! Do you think it would have been possible to create this ring without 3D printing?

I think it might be possible to use injection molding or cast a design like the Mars ring, but I don’t have the industrial ability to do that in my basement. 3D printing offers hobbyists like me access to the most advanced material forming techniques at a very affordable price. And, for more complicated designs which feature lots of negative space, there is simply no other way. I have designed lots of models specifically for i.materialise’s high-definition stainless steel. It offers a resolution that’s about as good as you can see with your eye, which is the level of detail I need for depicting dense data-sets.

Thanks a lot for your time, Casey, and thanks for sharing this story with us! 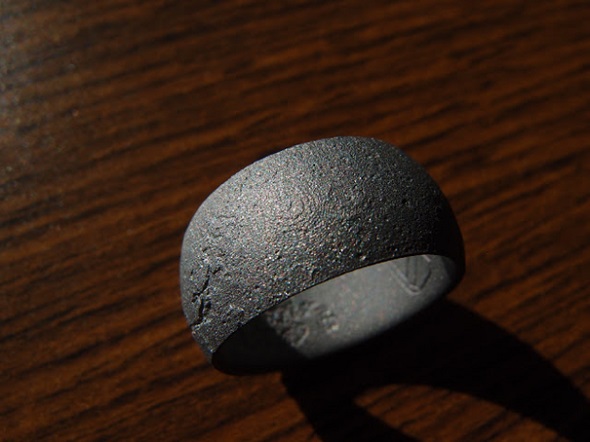 The Mars Ring: view of the Margaritifer Terra, Terra Meridiani, and Schiaparelli Crater.

Be sure to check out Casey’s website to learn more about this talented designer and his current projects. If you want to get a 3D print of this ring for yourself, take a look at Casey’s shop right here on i.materialise. Of course you can also print your own projects by uploading a 3D model, and ordering it as a high-quality 3D print in 100+ materials and finishes.