Creating a printable design is the crucial first step in the 3D printing process – and everyone seems to have a different opinion on which software is the most suitable for getting this job done. So what’s the most popular 3D modeling software for 3D printing? Read on to discover the top 20!

Ranking the most popular 3D modeling software for 3D printing isn’t that easy. Simply looking at the number of users of a certain software would create a misleading picture: while some programs were created especially for 3D printing communities (like Tinkercad) others are mostly used by visual artists and game designers – and barely by 3D printing enthusiasts.

That’s why we created an overview that takes several factors into account: the general popularity of the software as well as its use within the 3D printing community. In total, we looked at six different variables that made up the final score.

How we determined the most popular 3D modeling software

While these two factors show the overall popularity of the software, they do not distinguish between using the software for 3D printing or for any other purpose. That’s why we added some more factors that are related to 3D printing:

Popularity in the 3D printing community:

One last reminder before showing you the results: this evaluation is not about how good the software is. It’s simply about trying to put a number on the size of its 3D printing community. An outstanding software with a niche focus (e.g. sculpting software) will have a harder time scoring well because there are fewer 3D sculptors out there. Thus this list is all about the sheer numbers and does not make any statement about the quality of the software.

But now, let’s take a look at the results: here are the 20 most popular 3D modeling programs for 3D printing, based on various popularity variables. 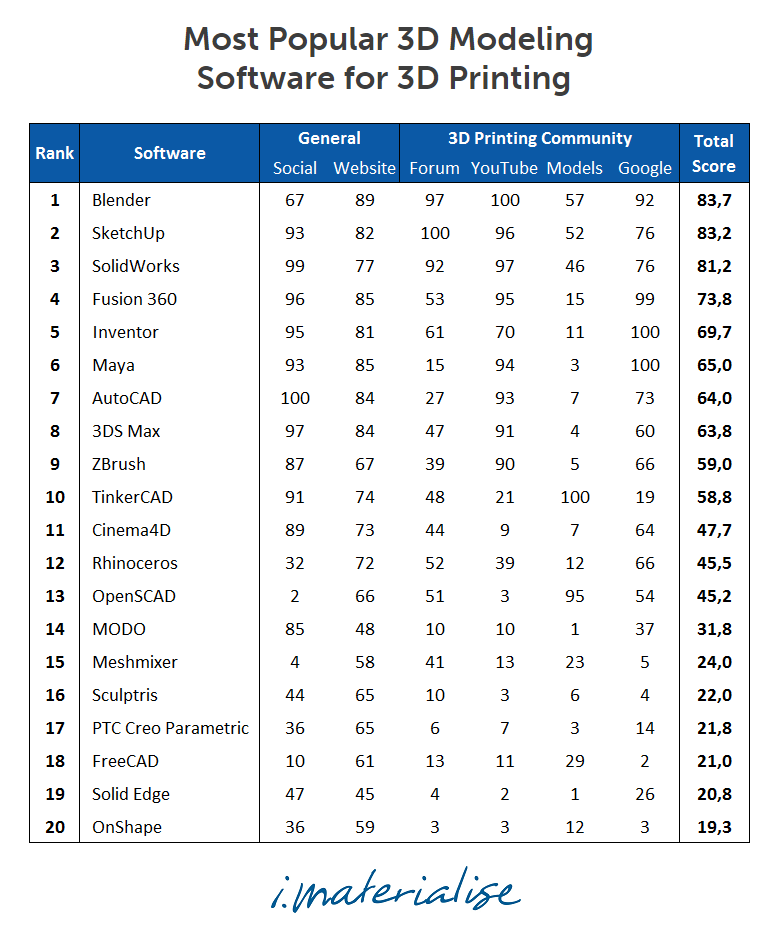 Rank 1, Blender: So here it is – Blender has the biggest, most active 3D printing community. The community is especially keen on sharing and spreading resources: Blender has lots of forum entries, YouTube videos and Google search results related to 3D printing content. This popularity is down to two reasons: first, Blender gives its users enormous design freedom with nearly innumerable tools, and second, it’s a free open-source software. However, Blender is known for its steep learning curve and is often considered difficult for beginners.

Rank 2, SketchUp: SketchUp takes the silver medal in our ranking. It simply scored very well in each of the categories we observed. SketchUp is known for its beginner-friendly learning curve and features tons of tools for geometric objects. And the best thing about it: SketchUp comes as a free version. SketchUp also recently facilitated prepping and sharing 3D printable objects and thus its likely that its ‘database score’ will increase even further in the near future.

Rank 3, SolidWorks: Next in line is SolidWorks, a popular 3D design solution for engineers. It focuses on the rapid creation of parts, assemblies, and 2D drawings but comes with a hefty price tag.

Rank 4, Fusion 360: Fusion 360 is making quite a buzz lately. Over the last two years, this software increased its popularity ranking all the way from rank 15 to rank 4! This development is probably due to the fact that Fusion 360 is now available for free for students, enthusiasts, hobbyists, and startups. It combines the professional capabilities of a high-end CAD program with an user-friendly interface and workflow. That’s why Fusion 360 is such a popular program among industrial designers.

Rank 5, Inventor: Inventor offers professional-grade 3D mechanical design, documentation, and product simulation tools. It is a very advanced 3D modeling program that requires a lot of training to master. As a high-end tool, Inventor is a direct competitor of Solidworks.

Rank 6, Maya: Maya brands itself as a ‘computer animation software’ rather than a 3D modeling software since most of its users use the program for animation, simulation, and rendering purposes. Nevertheless, Maya is considered one of the most popular tools in the 3D printing community.

Rank 7, AutoCAD: AutoCAD, a software for 2D and 3D CAD, was released back in 1982! However, its popularity within the 3D printing community decreased lately: during the last two years, AutoCAD fell from rank 4 to 7.

Rank 9, ZBrush: As already pointed out, niche products have a hard time scoring well on this list – which doesn’t mean that they are any less worthy. ZBrush is hands-down the most popular digital sculpting software. When creating figurines, magical creatures, and any other organic object it’s probably the mightiest software to go with.

Rank 10, TinkerCAD: Beginner-friendly software also has a somewhat difficult stand when it comes to this list. Free online apps like TinkerCAD offer the most important basic design tools and make 3D modeling as easy as it gets. However, once designers master this tool, they are quite likely to advance to other, more sophisticated programs. This is why we were surprised to see Tinkercad as high as the 10th rank, only slightly behind its bigger, more professional, brothers from Autodesk (such as AutoCAD, Maya, 3ds Max and Inventor).

Rhino, or Rhinoceros, a powerful and versatile modeling software that is very popular among product designers, is ranked 12th. Script-based OpenSCAD, and the sophisticated MODO software take the ranks 13 and 14. Meshmixer, a free 3D editing, fixing, and sculpting tool, comes in 15th.

Ranks 16 – 20, Sculptris, PTC Creo Parametric, FreeCAD, Solid Edge, OnShape: Sculptris, a free and simple version of sculpting program ZBrush, comes in 16th. PTC Creo Parametric (rank 17), is often described as the most powerful, flexible 3D modeling software in the industrial/professional sector. FreeCAD (rank 18), on the other hand, is a free, open-source parametric CAD modeler that is a great entry point for mechanical engineers who are new to the world of 3D modeling. OnShape, the first and only complete cloud 3D CAD system that lets everyone on a design team simultaneously work together using a web browser, phone or tablet, manages to get the last spot in the top 20, just behind Solid Edge.

What these scores tell us and what they don’t:

To sum it up, these scores show us the following things:

What these scores don’t show us:

If you’re new to the world of 3D modeling, this article about how to get started with 3D modeling might be useful. If you already know how to use a 3D modeling software but you’re having trouble with modeling for 3D printing, then avoiding these 5 common mistakes will definitely help. If you already have a printable 3D file, simply upload it to our website, choose from more than 100 material options, and let us take care of printing your object.