i.materialise and Microsoft Work on Getting ‘3D’ Mainstream with Paint 3D and Remix 3D

i.materialise and Microsoft Work on Getting ‘3D’ Mainstream with Paint 3D and Remix 3D

Imagine a world where you can 3D scan an object with your phone, edit and enhance these scans with an app that is just as easy as using Paint, and receive your design as a physical item without even owning a 3D printer. Well, we are working with Microsoft to make this happen.

Our collaboration with Microsoft in a ‘3D world’

i.materialise want to make high-quality 3D printing truly accessible for everyone. That’s why we were excited to announce our new collaboration with Microsoft in May 2016, and we’ve been working hard to achieve this goal together ever since.

In July we were able to offer Microsoft users the ability to tap into i.materialise’s 3D printing service with the 3D Builder app. 3D Builder is a free Windows app that lets you view, capture, personalize, repair and print 3D models.

In order to get even more users on board and make 3D modeling and 3D printing truly mainstream, especially among the younger generations, we are now excited about our next two projects together: Paint 3D and Remix 3D.

The ‘3D for everything approach’ with Paint 3D and Remix 3D

Paint 3D is a new version of Paint that will be released with the upcoming Windows 10 Creator’s Update (if you are an early adopter, you can preview Paint 3D here). Paint 3D is one of the major puzzle pieces in Microsoft’s mission to bring 3D to the masses.

Paint 3D is literally pushing the Paint we all know into the third dimension. It’s a very user-friendly app that makes creating in 3D easier than ever before. Users will have the possibility to import photos and turn portions of the photo into 3D objects or turn a 2D sketch into a 3D image.

Microsoft intends for these creations to be viewed on the HoloLens or printed as physical objects with i.materialise’s online 3D printing service. 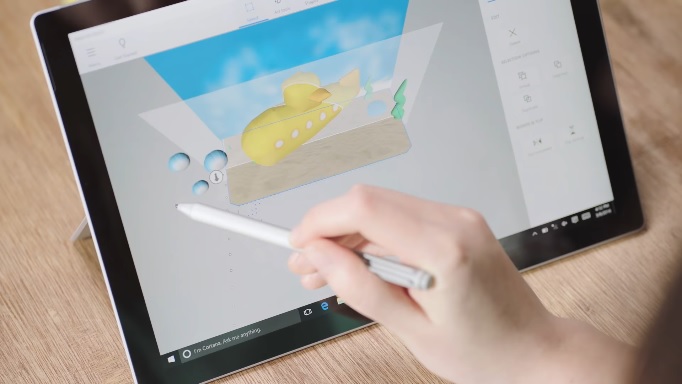 Along with Paint 3D, users will be able to share their designs with a new online community called Remix 3D. Microsoft will even offer a special feature for Minecraft players: you will be able to directly export creations from the game to the community or edit them with Paint 3D and turn them into stunning 3D prints. There will also be an option to import files from 3D modeling programs like SketchUp.

We’re already looking forward to the Windows 10 Creators Update that will be released in spring 2017. It’s time to experience 3D like never before.

As easy as 1, 2, 3D – it’s a snap to create 3D objects from scratch with the new Paint 3D Preview. #MicrosoftEvent pic.twitter.com/HRDjkcZPEm