From growing up in the German countryside to living in China, Noah Hähnel’s inspiring story is the focus of today’s blog post. This young designer will explain the highlights of his experience with 3D printing and will give some tips for 3D-printed jewelry beginners.

How did you start designing jewelry and what was the first design you ever created?

Ever since I was a little kid, I loved to create and early on I discovered my passion for films. Through films, I also got interested in visual effects and that made me want to learn 3D modeling. With 3D modeling, I discovered 3D printing, which gave me the opportunity to turn my ideas into something physical you can hold and feel.

My first ever design for jewelry was a simple pendant with two arcs in it that I made as a present for a relative and printed it in stainless steel. She loved it and friends of her asked me to do more. Like every designer, I live for approval and attention. 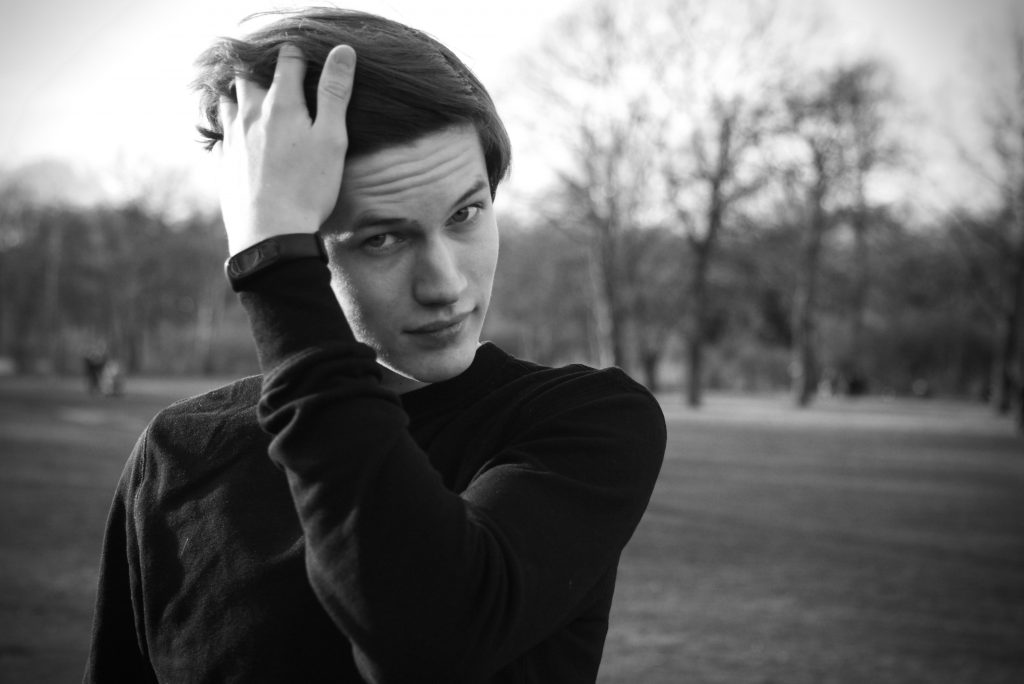 In 2013, when I was just 14, I tried my luck at a competition by i.materialise where you had to design a traditional Japanese hair piece. I made it to the 10 best designs and the piece was shown in Tokyo. That’s when I got the idea to sell jewelry.

Even though my passion still lies in filmmaking and becoming a director, I continue to create jewelry that can be worn by a broad audience. I can put my ideas and stories inside them, just like with movies.

Where did you get your inspiration for your latest project, the Garden Collection?

This collection consists out of five new designs and it was inspired by an idea for a short film, about a mystical part of a forest that never has been touched by mankind. One ring, for instance, is made of vines that grow around your body.

Also, I am in love with nature. I grew up in a rural area in Germany. We had horses, cats and dogs, and we are surrounded by cows and forest. That is why I often use nature in my designs. 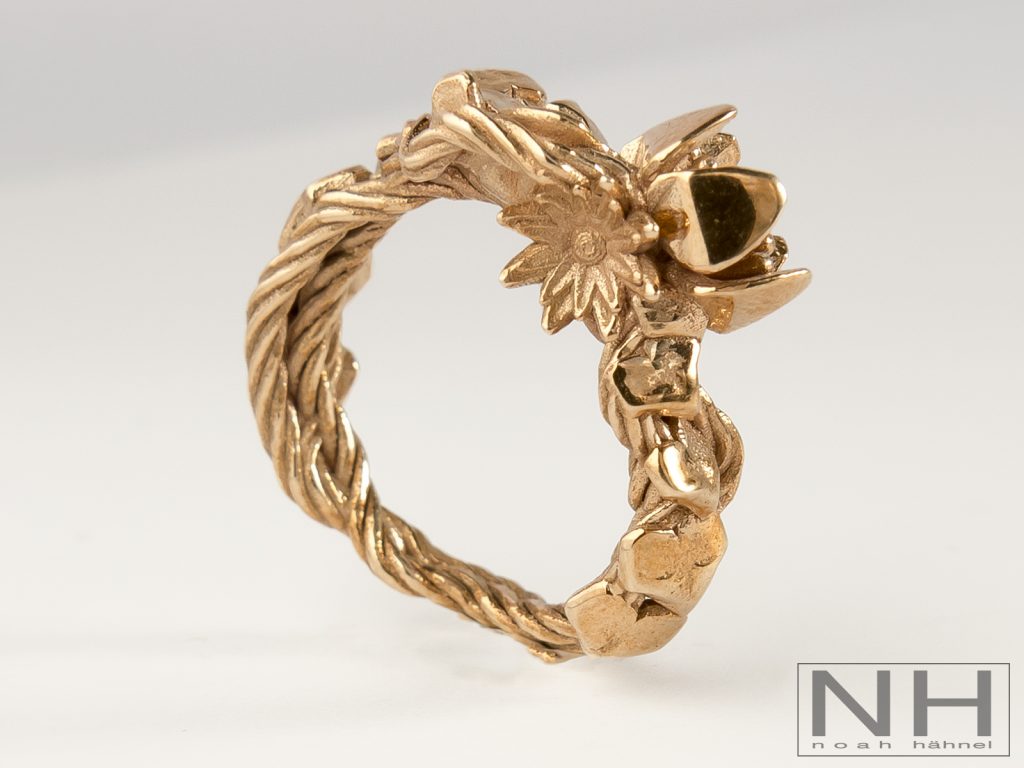 What is your design workflow for a new project?

My workflow is mostly spontaneous. I do not tell myself: “I need to get new designs every week”. I

design when I feel inspired, or someone asks me for a piece. Sometimes I draw the basic model on paper, even though I can’t draw at all, but as long as I can see what it’s supposed to be it is fine. But most of the time I just start on my computer with an idea and see how it develops.

For example, the idea for the Garden Ring came from a short film idea of mine. I first started by designing vines and several flowers. After that, I thought about where to use it. I often design something first and then see what kind of jewelry it should be used on.

After I have finished designing, and have exported and double-checked that no triangle is missing and no sizes were changed during the export process, I finally hit “Order”.

I am in love with nature. I grew up in a rural area in Germany.
That is why I often use nature in my designs.

Which 3D modeling software do you use for jewelry?

I design with Cinema 4D. I started using it when I was twelve. Later I noticed that many German companies I was a trainee for used it too, which was helpful. I think it is a really powerful and user-friendly program that developed from a pure motion graphics tool into an all-rounder, with a focus on modeling, sculpting, animation and visual effects. 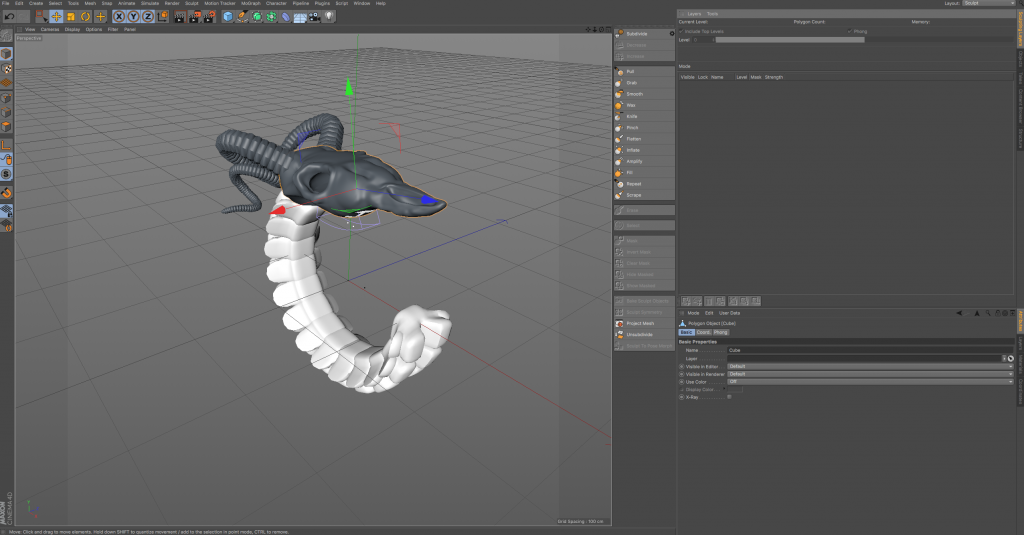 What is your favorite 3D printing material?

My go-to material is bronze. The wax 3D printing allows for incredible small details and cheap prices. Bronze is beautiful, durable and can be changed with acids. It is also not likely to cause allergies and is affordable for most people. All of this adds to the fact that bronze looks a lot like gold, which is my favorite color.

Bronze and gold have been used since ancient times and combining these with a modern technology such as 3D printing feels and looks amazing. One of my philosophies is to make something that cannot be achieved with traditional methods. I often see designs that are beautiful but very “simple” and I ask myself: why not use the full capabilities of 3D printing technology?

Bronze and gold are used since ancient times and combining these with modern 3D printing feels and looks amazing.

What is the most critical step in your design process in 3D?

The greatest challenge for me is the export of my designs. Sometimes it takes me days to clean up a design so no triangles or walls glitch and disappear. While modeling, I do not really care about technical stuff so the exported models are as messy as my desk or thoughts.

Can you give some good advice for 3D jewelry designers?

I try to keep my files as editable as possible. When I started out, I finished with one completely merged object which was easier to export, but difficult to make alterations on after completion, like changing wall thickness, or the size of certain details.

As an example, the flowers of the Garden Ring might be printable now, but if I scale down the whole model to a smaller size they might become too small to print. So I only scale down the vines to achieve a smaller ring size.

This technique also allows me to only change small details for each customer and thereby make the object a little more unique. Furthermore, I can increase the ring size without increasing the bounding box, which allows for cheaper prints.

While modeling I do not really care about technical stuff so the exported models are as messy as my desk or thoughts.

Another important thing I have learned when I design jewelry for 3D printing is to always keep in mind what material you are designing for. With bronze, you can achieve everything from matte brown to shiny gold. That depends on how you design the highs and lows and how even the surface is.

The vines of the ring are a great example. Even though the indentation between the vines is only around 0.8mm deep it looks a lot deeper because it has a darker shade that you can’t polish. A rough surface always looks more detailed than a plain one. 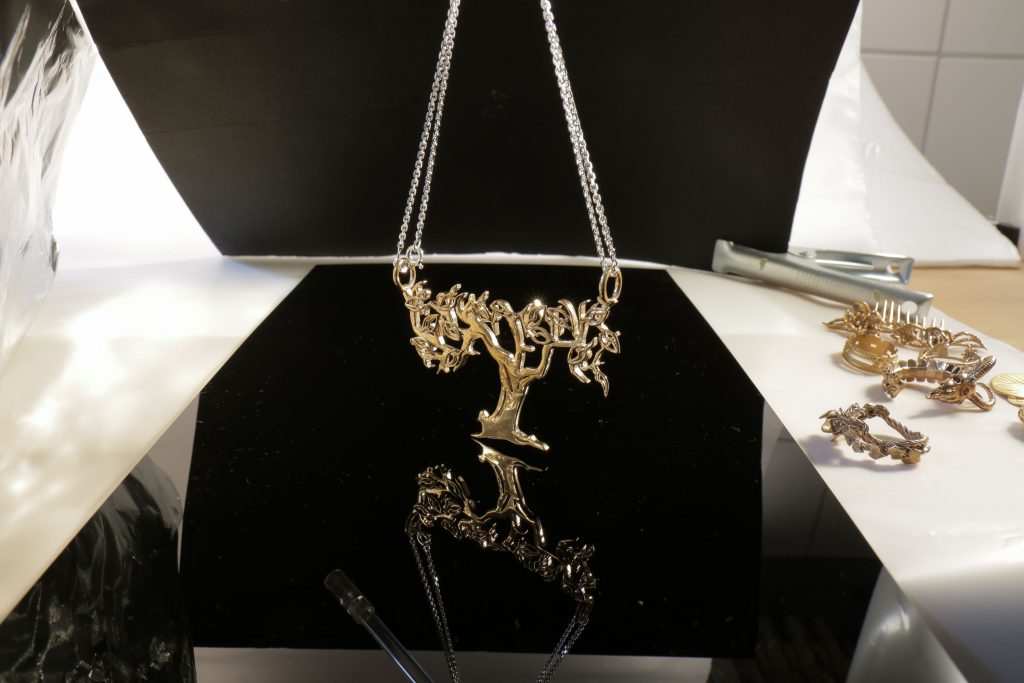 And how do you present your final pieces to online customers?

Once I receive the printed models I take pictures. Often by myself but this time I got help from filmmaker Sören Schulz.  We built a softbox out of diffusion gels. We used two different kinds of surfaces to place the jewelry on: a classic white one but also a black reflective glass.

After the photo shoot, the pictures were edited in Photoshop. We shot the pictures in RAW because it’s always nice to have the extra information, like better dynamic range. This time we are also planning to shoot a little commercial video.

If you want to know more about the work of Noah Hähnel, check out his Facebook page. You can also buy one of his special pieces of jewelry on the i.materialise online shop.

If you got inspired by Noah’s story and want to design jewelry for 3D printing, check our tutorials for each step of the creative process.