Guido Salimbeni is an Italian artist based in Florence. But he is not just any painter. Guido’s skills with the brush are just as good as his skills with modern 3D modeling software, which is why Guido combines traditional oil painting with 3D printing. In this way, the Italian artist has managed to find a truly unique style of art.

Most often, he paints in oil on canvas and completes the painting in multiple sessions. He also models important elements of the picture in 3D and prints them with online services such as i.materialise:

“My aim is to create visual tension in my painting through the use of subjects that have elements of ambiguity, mystery or complexity. I always introduce 3D printed pieces on top of the canvas to achieve and enhance this visual tension. These subtle 3D printed elements introduce optical illusions in terms of unclear space, overlapping objects, distortion of depth and a wider range of lighting values.”

Just received the #3dprinted piece for my painting from @imaterialise ! It's always a nice surprise to open the box! pic.twitter.com/3i4OZBX8b9

The effect 3D printing has on his paintings works best when walking by the images. When looking at the paintings from an angle, a subtle 3D effect appears, making viewers look twice at the work of art. In the example below, a painting called ‘Red Cardinal in the Snow’, you can see the effect once you look at the images from a certain angle. 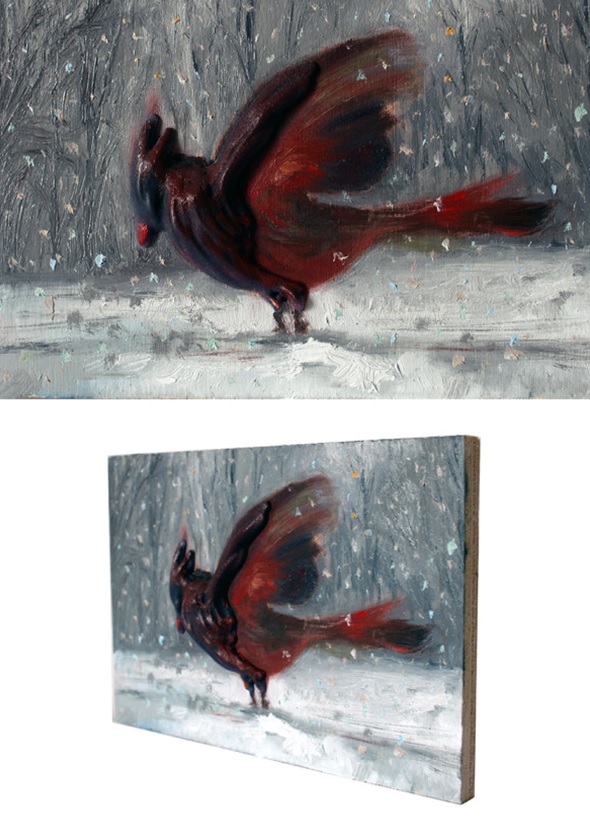 “The left side of the bird (the head and breast) is protruding outwards. It has been 3D printed in multicolor sandstone material. The right side is painted on a wood panel, just like the rest of the painting. The idea is to create a perception of depth using a central perspective but interrupted by unexpected and illogical elements, like the snowflakes placed in front of the tail. The rest of the snow is falling behind the bird. The front part of the body of the bird is protruding outward so there is a subtle, illogical overlapping of elements, where the snow is falling both behind and in front of the bird and yet the bird is physically the most outward element of the painting.”

Guido’s short video shows exactly how this works. A small part of the painting was 3D printed and put on the image.

Another great #3dprinting element for my painting done @imaterialise arrived now! Ready to be applied & painted over pic.twitter.com/yuOCMLjY2L

Guido used the same technique for many of his other paintings. The Bird Splash Painting for example, featured the 3D printed head and breast of a bird. Once again, when taking a look at the image from an angle, the 3D printed parts clearly stand out. 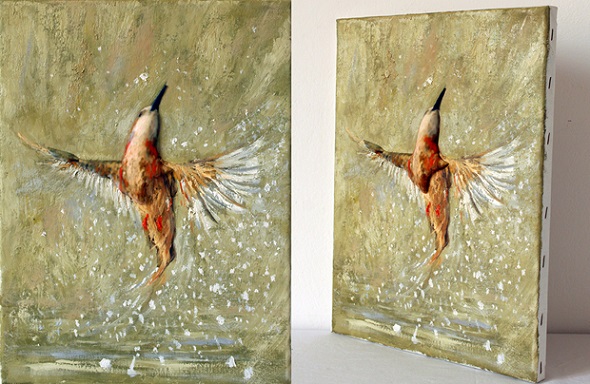 Guido has experimented with a lot of materials. Besides multicolor 3D printing, the Italian artist has already used transparent resin to create the effects of water drops or polyamide (white nylon plastic that can be painted by hand). In the short video below you can see how Guido places the white 3D print on his painting and colors it by hand afterwards.

Got the piece for my #contemporaryart project! Thanks @imaterialise for the excellent and quick #3dprinting service! pic.twitter.com/PdoIbWnwr2

Learn more about Guido Salimbeni and his outstanding pieces of art on his personal website and make sure to browse through his collection of truly unique paintings. If you want to learn more about 3D Printing your own objects, take a look at our 100+ 3D printing materials and finishes, and get your quote for a high-quality 3D print in real time.