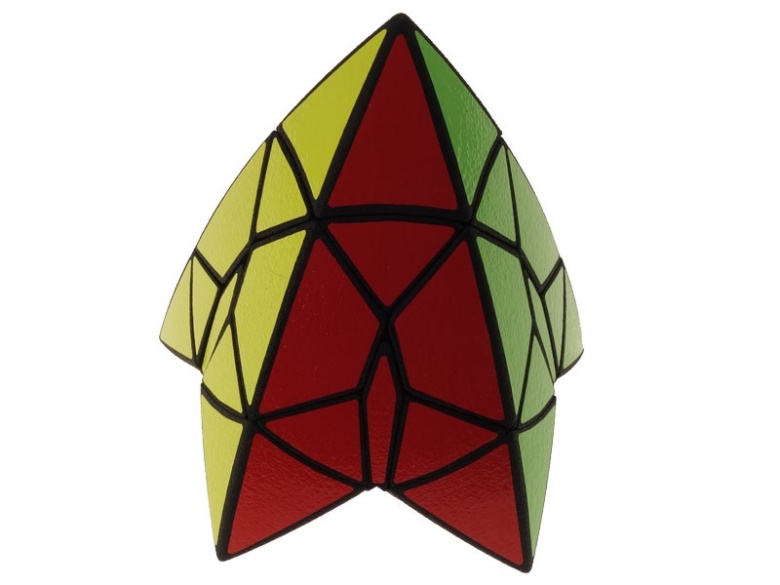 Rocket Star is related to the Rocket Twist puzzle. However, instead of threefold symmetry, Rocket Star has five-fold rotational symmetry. The puzzle has six corners, five edges, twenty triangles and five semi-hidden centers. In its solved state, the puzzle has five active rotation axes, each 9 degrees "north of the equator" (Jaap's Sphere modelling) and equally spread out around the north-south axis.

What makes this puzzle special is the same as for Rocket Twist. After two, three or more turns, the puzzle is back to its original shape, but in a different orientation. As a result, some rotation axes have disappeared and some new one have reappeared. The puzzle jumbles and it can be considered quasi-doctrinaire. It is undecided whether the puzzle is deeper-than-origin-cut or not.

Of course, if one repeats left-right-left-right enough times, one returns to the start state. Quiz question: how many moves would that be?

Read at the iMaterialise Forum.

Please order a 3D-printed do-it-yourself puzzle kit from iMaterialise at this page (check with Oskar about screws and stickers), or contact Oskar directly if you are interested in obtaining a fully colored, stickered and assembled sample of this puzzle.

Oskar Puzzles offers mechanical puzzles and objects that can only exist thanks to 3D printing technologies. All designed by M.Oskar van Deventer.