The International Space Station Welcomes The Moon Gallery Art Collection Onboard, Including A Miniature 3D-Printed Cube

The International Space Station Welcomes The Moon Gallery Art Collection Onboard, Including A Miniature 3D-Printed Cube

Although the Moon is around 238,855 miles (or 384,400 km away), humanity has always been fascinated by it. From ancient lunar calendars to the Moon landing in 1969 to low and high tides affecting shorelines at this very moment, Earth’s natural satellite is entwined in our past and present. But how will it shape our future? Discover how the Moon Gallery — including a 3D-printed cube — aims to teach us about the unique conditions in space for future generations and extend humankind’s cultural reach into this final frontier.

On February 21, 2022, the international space station (ISS) received its usual cargo of supplies and scientific research along with a special payload: the Moon Gallery. An international collection of miniature works of art “housing the seeds of a future, interplanetary culture,”¹ the Moon Gallery contains 64 unique pieces of artwork in an eight-by-eight grid. Each piece is approximately the size of one cubic centimeter and contains an eclectic array of artwork that demonstrates humanity’s cultural and technological achievements. One of which is a stainless-steel 3D-printed cube printed by i.materialise.

One small step for man…

The 1 cm³ structure houses three space-themed pieces linked to the Dutch rock band, The Gathering’s album, “How to measure a planet?” They consist of a tiny microchip/nano SD card containing the album and discography of the band, a magnetic cassette strip with a fragment of the music, and a scroll of paper with the formula for measuring a planet.

The formula for how to measure a planet.

“Getting all those items in there was challenging. Plus, we had a short time frame between the submission and the launch. But we managed it,” says Bart Smits, a founding member of The Gathering (and vocalist/lead singer from 1989 – 1993). The band’s album is an ode to science, dealing with space travel and escapism — the perfect candidate for the Moon Gallery project. However, although the music fits the organization’s cultural remit, there were still technical challenges related to the submission criteria — installing the band’s work into an enclosure up to 1 cm³ before the payload delivery date.

“We had such small margins to work with due to the exhibition’s time frame and the cube’s parameters. But we’ve always believed in a ‘do it yourself’ mentality, so I got to work. I’m a bit of a tinkerer, and I’m interested in 3D printing, which gave me the idea to 3D print the cube myself,” Bart says. 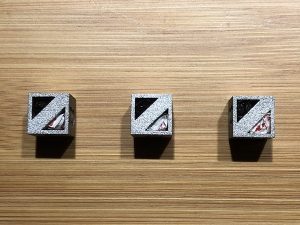 Three Stainless Steel cubes were created for the ISS, the Moon, and as a backup piece.

He used online tutorials and open-source 3D modeling software to design the cube and then printed a few prototypes — one prototype was printed in carbon and another one using a resin printer. However, Bart realized that the final design must use pinpoint accuracy. “We were going to use a micro SD card, but that was physically too big! The nano was the only choice, and due to the card’s dimensions and the submission deadline, we needed a service that could offer precision and had a proven track record in terms of 3D printing.”

Bart decided to contact us for some expert guidance, particularly as he was not familiar with printing in metal. “Originally, I wanted to use Titanium, but after speaking to the team at i.materialise, they advised me against it as the walls were too thin. However, they helped me optimize my design and suggested another material: High-Detail Stainless Steel. This kind of know-how is invaluable, especially for a hobbyist like me. Also, affordability, easy communication, and on-demand printing — from lead time to delivery — helped immensely,” he says.

Three Stainless Steel cubes — for the ISS, the Moon, and as a backup — were delivered and measured below the 1 cm³ threshold at around 9.96 mm. “This version is much more accurate than the prototypes. When I placed the SD card, and the other items in the cube and everything fit perfectly like a glove, it was a fantastic moment.”

Can you hear the Liberty Bell in space?

The 3D-printed cube and the Moon Gallery are now floating in orbit in a ‘plug and play’ research module provided by Nanoracks, a US space services company. The free-floating artwork will act as test subjects so that the company can carry out precise object tracking using advanced cameras inside the enclosure.² The artwork is aboard the ISS for ten months, with the Moon-bound version launching sometime in 2025. 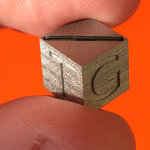 A close up of the the Stainless Steel cube. 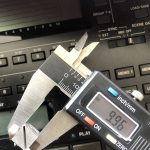 The cube measured below the 1 cm³ threshold at around 9.96 mm. 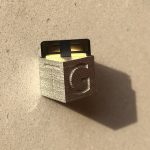 The cubes are embossed with ‘TG89,’ referring to the bands founding date — The Gathering ’89.

“The lessons we learn from this endeavor about containment, material dynamics, and enhanced imagery will help in the design of future experiments and in implementation of The Moon Gallery’s ultimate goal to establish the first art gallery on the Moon,”³ says Scott Rodriguez, Vice President of Government Programs at Nanoracks. But for Bart and The Gathering, the Moon Gallery fulfills their ambition of getting closer to space.

“It was unreal to watch the rocket launch and see something you’ve created reach space. The lift-off and the docking sequence were truly amazing and not something you expect to experience in your lifetime. It was a proud moment for me personally. As of now, The Gathering is the first band on the ISS. And we’re part of the first art gallery in space! That’s genuinely unique. What’s more, if everything goes well, we’ll also be the first band to be a part of a permanent exhibition on the Moon for future generations to enjoy. And it’s about time; we think the Moon needs some music!”

Ready to elevate your hobby with designs of your own? Upload a 3D model today.