Leuven is a hotbed for innovation, renowned for its world-famous university and scientific and research-based institutions. The city is also prominent for its drive towards sustainability, gaining accolades such as the European Green Leaf Award (EGLA) and the title of European Capital of Innovation (iCapital) in the last few years.

Stad Leuven is constantly investigating ways to combine innovation and climate-change initiatives to improve the lives of residents, typically working with local suppliers and businesses that share their ethos. That’s why they contacted our parent company, Materialise, to help with their latest project, an intricate 3D-printed model of Leuven’s Town Hall.

Leuven Town Hall (Stadshuis in Dutch) is over 500 years old, so it’s normal that the building needs a bit of a renovation. Certain areas will have improved accessibility, while other structures will be worked on in the future. The restoration plan was the inspiration behind the scale model (maquette) as the gothic Stadhuis is a city landmark that has a special place in the locals’ hearts. However, as the building is rather complex, Stad Leuven wanted to keep the people informed about updates in an easy, visual, and precise way. The maquette was a perfect choice. 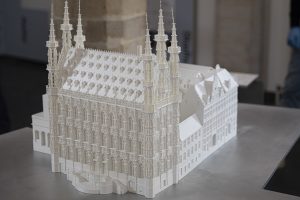 This intricate maquette of Leuven’s Town Hall is made from Bluesint PA 12, a sustainable, SLS material.

Along with being an accurate reproduction of the town hall, the model also had to meet specific conditions. Stad Leuven wanted the maquette to embody the spirit and DNA of the city in its design, as well as being modular, multifunctional, innovative, and, most importantly — sustainable. With such ambitious criteria in mind, they were delighted to find a local solution on their doorstep: Materialise Manufacturing.

The maquette is 3D printed from Bluesint PA 12, a rapid prototyping material made from 100% re-used powder. This characteristic makes it more sustainable than other laser sintering materials and reduces the customer’s carbon footprint by about 30%. “Stad Leuven was looking for an innovative company with the expertise to sustainably produce models of all shapes and sizes,” says Sofie Claes, Account Manager at Materialise Manufacturing.

The team at the council also endorsed the material’s environmental credentials. “Bluesint, as a recycled powder, helps us reduce our carbon footprint in the making of the scale model. This means it completely fits the sustainability goals we’ve set ourselves as a city,” explains Lesja Vandesande, Project Coordinator at Stad Leuven.

The Manufacturing team had previous experience printing a 3D model of Antwerp City Hall. However, this new construction brought some rather different challenges to the team. “We knew that Bluesint was the ideal material to use based on its ecological properties, as Stad Leuven emphasized they wanted to reduce their carbon footprint wherever possible. But we’ve never printed such a high-precision model using this material before,” says Sofie. “The town hall is famous for its ornate architecture and intricate detail, so capturing something so elaborate in Bluesint was a challenge. However, our in-house knowledge gained from optimizing various designs, and our post-production finish techniques were particularly important to ensure this project met Stad Leuven’s expectations,” she continues. Another crucial factor was speed, as Stad Leuven wanted the maquette assembled in their main office in weeks.

Modernizing a masterpiece: 3D printing half a millennium’s worth of history

Materialise took on the project with 3D scanning and measurement specialists Pelser Hartman, who created detailed scans of the imposing edifice and sent them the files. Then, the Manufacturing team imported the files into Materialise Magics and optimized the designs, ensuring the files were print-ready for production. 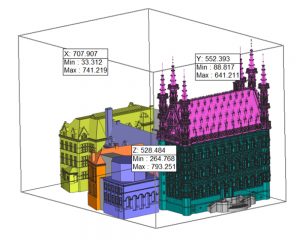 Finally, the team got to work printing the nine structures using SLS printers, to produce the structures as quickly as possible. “Creating the Stadhuis in Bluesint ticked all the boxes: it’s quick, efficient, and ecological,” says Sofie. The Manufacturing team managed to print, paint, and assemble the roughly meter long architectural 3D model for Stad Leuven in time for their public consultation about the restoration program. 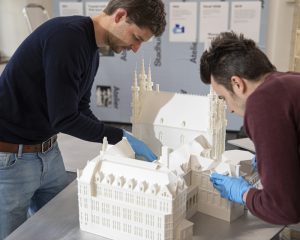 Materialise created the 3D model using scans that were uploaded to SLS printers and optimized by Materialise Magics.

“Bluesint, as a recycled powder, helps us reduce our carbon footprint in the making of the scale model. This means it completely fits the sustainability goals we’ve set ourselves as a city.” — Lesja Vandesande, Project Coordinator at Stad Leuven.

The 3D-printed model now sits proudly at the center of the city diorama: the physical embodiment of Stad Leuven’s goal for a sustainable, climate-neutral city in the years to come.