“3D Printing Is A Revolution”: A Talk With Artist Koen Van Daele

“3D Printing Is A Revolution”: A Talk With Artist Koen Van Daele

Long-time i.materialise user Koenraad Van Daele combines a classical background with modern techniques, creating some truly inspiring designs. In this user spotlight, we talk to him about the inspiration and techniques behind his work and why 3D printing is so important to him.

When Koen began his first project with i.materialise in 2008, it marked a significant shift in his journey through the art world. Classically trained as a marble sculptor from the age of 18, including two years spent in Carrara, Italy — the center of the stone sculpture industry — Koen now mainly focuses his attention on vector art and 3D modeling. But what inspired the shift?

“I bought my first computer in the 90s and started using graphic programs,” he tells us. “I realized that I had a talent for drawing with software. When you work as a web designer or system engineer like I did, it’s very easy to go from one platform to another, and in between, start designing for 3D.”

The perks of 3D printing

Having known Materialise for quite some time and living relatively close by, the decision to bring his designs to life through i.materialise’s 3D printing services was only natural. Being able to drop by and pick up his prints was one advantage. However, it was the high-level factory and quality of finished parts that really appealed to him — results he says that would be costly, difficult, and time-consuming to recreate through a personal 3D printer.

But the discovery and rise in popularity of this new technology did more than redirect Koen’s focus; it inspired a change in creative thinking. The traits that make 3D printing so appealing presented a new world of opportunities that greatly impacted his designs.

“I remember a very specific moment when I discovered that it was possible to make interlocking parts with polyamide SLS printing. It was a very important moment because I wouldn’t have thought of doing that before. Being able to have objects interlocking or one object in another is a very different way of creating than for clay modeling, for instance. For me, 3D printing and design is a revolution.” 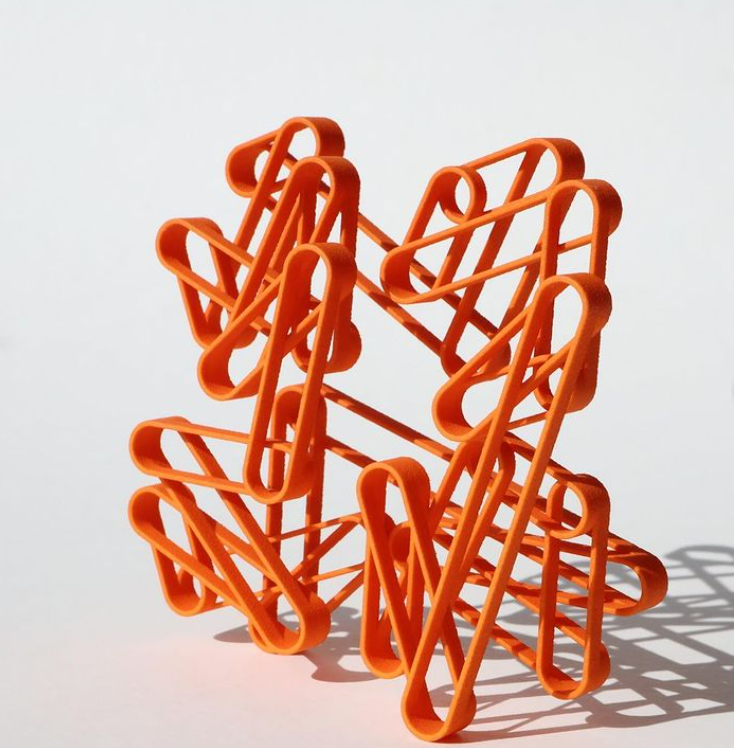 3D printing is ideal for creating complex and interlocking parts

Interlocking parts, parts within parts, and particularly the finer details made possible through 3D printing were all important factors in his decision to move away from the more traditional (and dusty) art forms.

“I don’t think it would be possible to make something 10 millimeters long with a one-millimeter radius in clay or stone without breaking it instantly,” he adds.

Plus, there are still plenty of materials available for him to play with, though one technology and material stand out above the rest.

“My favorite 3D printing material is Steel. It’s something extraordinary, because… it’s Steel! I don’t know how to say it, but for me, it’s like a little bit of magic. It’s also a very sustainable material and comes close to Bronze, which is a classical material.”

A unique mix of styles

Given his background, it’s easy to see the appeal that classical materials may still hold. Indeed, Koen is no stranger to merging the traditional with a modern approach, particularly when it comes to designing his newest pieces.

“So, I have two ways of working,” he explains. “One is very geometric — vector design — and the other is using what I call my silent partner, a wooden mannequin that I scanned some years ago. I can play around with it in my 3D software. In some ways, these are opposites because there is a tendency in art that your work has to be abstract or figurative. But I use both. I don’t swear by one way of working — the digital part is the way I work, whether it’s geometric drawings or figures with the doll.”

This combination will likely be on show again soon, with Koen kindly interrupting his latest project to talk to us. His inspiration? Music and mathematics — a unique combination of creative and logical that is sure to create something special.

“Last weekend, I was at a concert with a classical orchestra, and it inspired me to make something that would express the many musicians on stage. An idea clicked in my head: I will make a group of figures because the group is something that’s also mathematical; it’s a number of figures. So, you see, mathematics is also introduced in my figurative artwork, not only in my vector drawing. It inspires my geometric work but also my figurative work.” 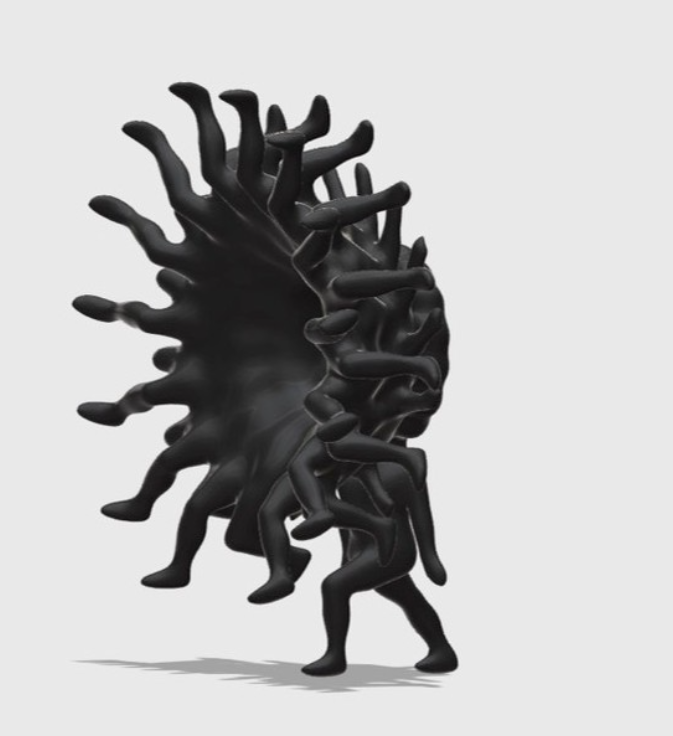 Koen’s piece is inspired by figures — human and mathematical

Perhaps Koen’s most high-profile piece yet is the Flemish e-FA award he designed in 2021. After being contacted by a bureau in Antwerp interested in working with artists with a proven track record in contemporary sculpture, he set to work, combining his knowledge of code and 3D design with the materials and technologies available to him through i.materialise.

“I discovered that code I use for websites can also create vector drawings. Once you know the code, you can play with it and be surprised by what comes out if you include random factors in your drawing. I look at a drawing and think, what if it was like an architect’s plan for a building? Could this drawing become something else? What would I have to do to make it physical? So, I use my 3D tools to extract and play with what I draw, and that’s how I came to the award.

“It was a geometric shape that I extracted or rotated, very simple moves, and that became a 3D object. I chose Polyamide because I had a desire to use color. Of course, there was a budget. A plus point of using i.materialise is that you have a very good online tool to calculate the price of the objects.”

While Koen is naturally proud of that particular piece, he insists that he doesn’t have favorites. Rather, he is always looking forward to his next project, especially as he can never be 100% certain how it will turn out. Surprisingly, this uncertainty doesn’t weigh on his mind — instead, it’s something that he sees as a positive. 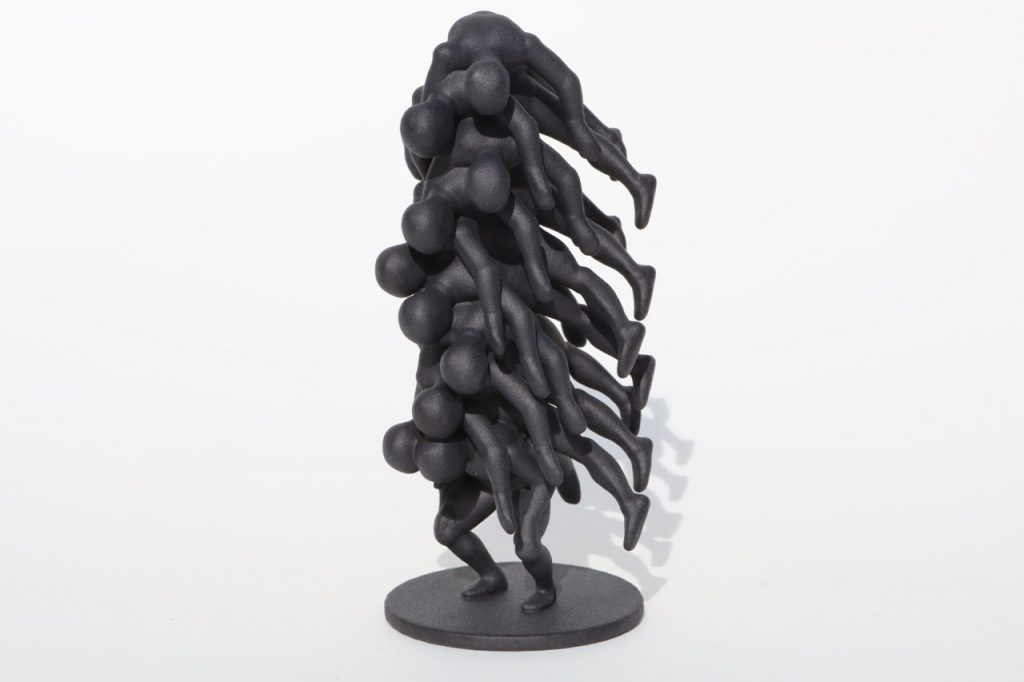 Koen is always excited to see the results of his work

“There is a surprise factor that I couldn’t have in marble or stone because it goes very slow. You’re always looking to the next cut, so the element of surprise is gone, or isn’t there like it is in 3D printing. It’s fascinating, like something magical. There are a lot of possibilities with materials, and I look forward to discovering what I don’t know yet. That element of innovation is very important.”

This willingness to expect — and accept — the unexpected is something Koen advises other aspiring contemporary sculptors to adopt. Experimenting and trying new things had inspired many of his works, and indeed, his very way of working.

“You should try and experiment and leave room for the random factors in the whole process,” he suggests. “That for me is important, the random factor, things to discover that aren’t there by design. Because it’s art, it doesn’t have to serve some kind of practical purpose. Let’s say I order some prints in resin, with the supporting structures. Normally, they’d be removed, but they also have some visual quality. So, that is something that happens in a creative process with artists: everything that happens could be interesting in the final piece. The structures can become part of the artwork, let’s say.”

We’re certainly interested in seeing more of Koen’s work, and just like the man himself, we can’t wait to discover what surprises his next sculpture brings. Everyone here at i.materialise would like to thank him for his time and hope that his story inspires you to try something new.