Imagine bringing your favorite character from an illustrated book to life in the form of a 3D-printed figure! That’s what happened to Father Perkins, the character dreamt up by the author and illustrator John Herzog.

Herzog has a background in animation and has dabbled in filmmaking and screenwriting. He turned one of his characters into a real figure with the help of a 3D designer and the possibilities of 3D printing offered by gray resin.

He explains how his story came to life in this interview.

Turning a character into a 3D figure: from drawing to 3D print

Who is Father Perkins, the main character of this story? “I’ve been thinking about this a lot lately. The character has been with me for the last few years and I’m still figuring out exactly who he is. I think Father Perkins is the embodiment of my desire to make the world a better place. That’s the cerebral answer. The basic answer is that he’s a Catholic priest who’s a dog.” 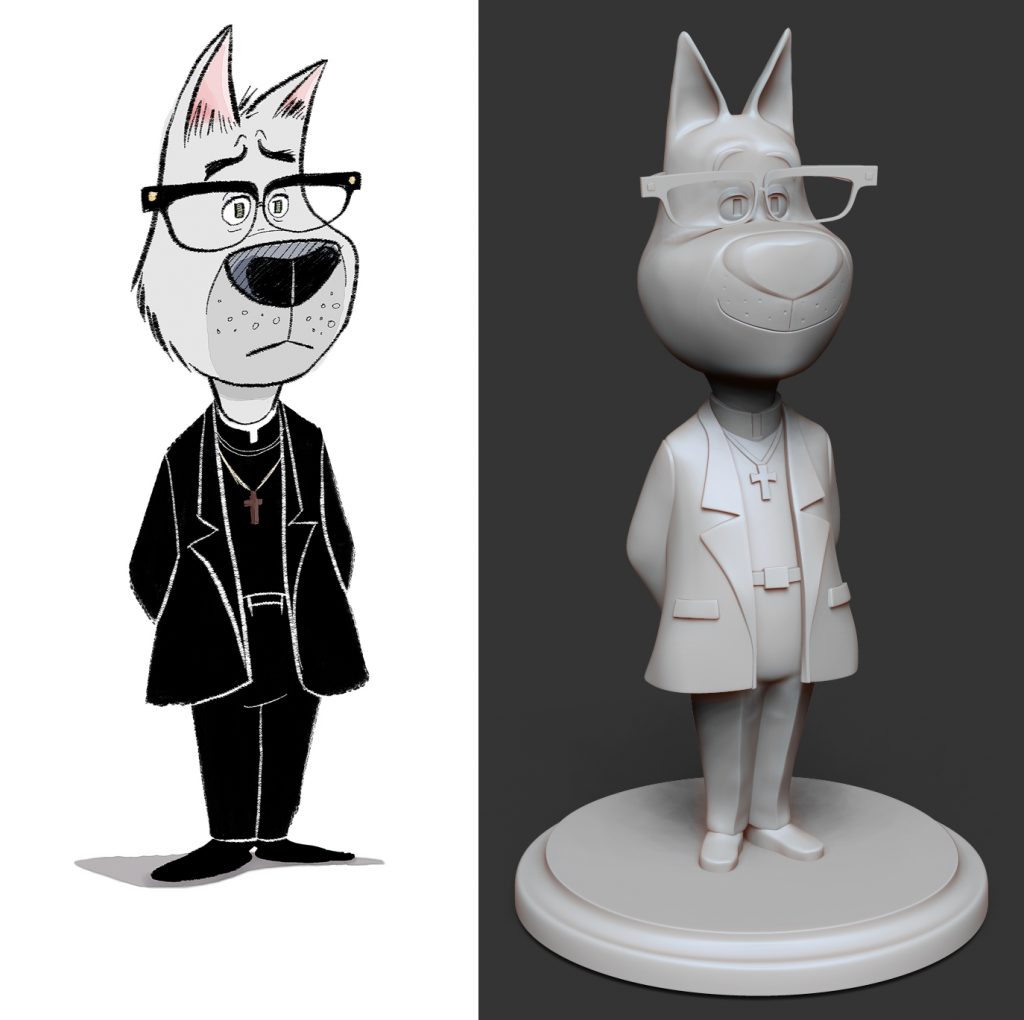 Father Perkins was originally going to be in a weekly webcomic, so John Herzog thought the character would be good to have as a maquette, allowing him to accurately draw the character from all angles.

“While the idea has evolved from a webcomic to a children’s book, it’s still great to have the maquette and 3D model of the character. Consistency is something that often plagues illustrators, so this is a wonderful way to ensure that the character remains on model throughout the book”, explained Herzog.

When an illustrator meets a 3D designer

The illustrator worked with a professional designer for this 3D design and explained why to us: “While I’ve done some modeling in the past, my skills are incredibly lacking. It’s something I definitely want to get better at in the future. But given my inabilities there, I decided to hire my friend and former classmate Garrett Pond to handle modeling the character. Be sure to check out his wonderful work. The guy is brilliant.” 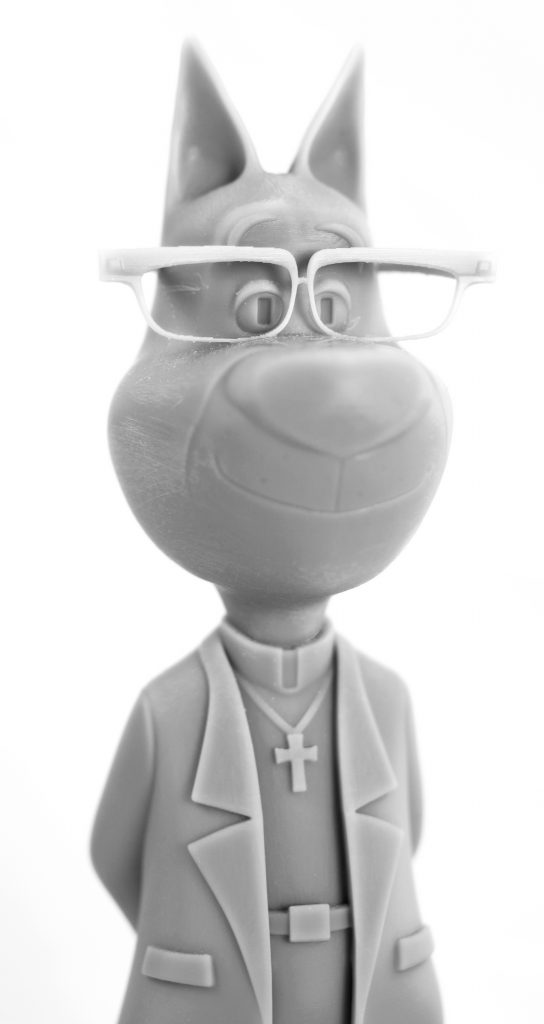 The creative process to 3D printing this figurine started with John drawing the character and handing it to Garrett.

“And Garrett, being the amazing modeler he is, was able to have a first pass done fairly quickly – just a couple of days.” After this, the usual back-and-forth with revisions and tweaks started. Josh would provide Garrett with drawings of the model and he would adjust accordingly.

Garrett also hollowed out the model so that the printing costs would be significantly less.

Click on the image to see all the notes between Herzog and the 3D designer to get the perfect 3D print.

It’s all about the right 3D printing choices

Joh Herzog decided to 3D print with i.materialise for many reasons:  “I settled on using i.materialise to print because of all the characters I saw on the site. I knew that the complexities of the design would be handled with love and care. Needless to say, I’m incredibly happy with the result. The part I was most worried about was the glasses, but they came out looking amazing!” 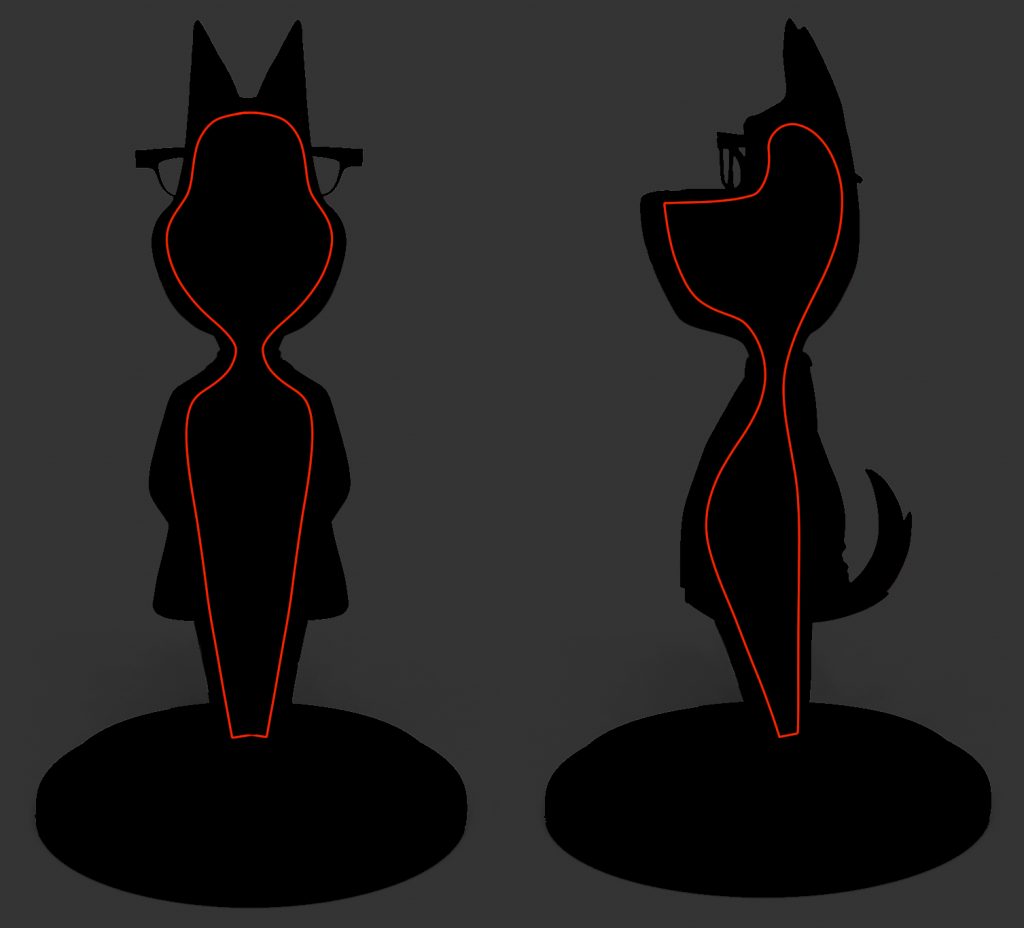 Gray Resin has the perfect qualities for such a project but Herzog also has an aesthetic reason for choosing the material: “I just liked the color. And typically, the maquettes done at major animation studios are done in either tan or gray, which I’ve always liked.”

“I settled on using i.materialise to print because of all the characters I saw on the site. I knew that the complexities of the design would be handled with love and care. Needless to say, I’m incredibly happy with the result. The part I was most worried about was the glasses, but they came out looking amazing!”

The magic of turning an illustration into 3D printing


This is the only character that John Herzog has turned into a 3D figure so far but it won’t be the last. “I’d love to have more of my characters translated to 3D and printed. There’s something truly magical about the process of taking a flat, drawn series of lines and shapes and turning it into a tangible object. It becomes more real somehow. It’s fantastic.”

In between design assignments and new books to write and illustrate, and with the time that the illustration classes that he teaches leave him, Herzog is already thinking about a new character to model and print. The funny thing is that this time it will be a cat.

There’s something truly magical about the process of taking a flat, drawn series of lines and shapes and turning it into a tangible object. It becomes more real somehow. It’s fantastic.” 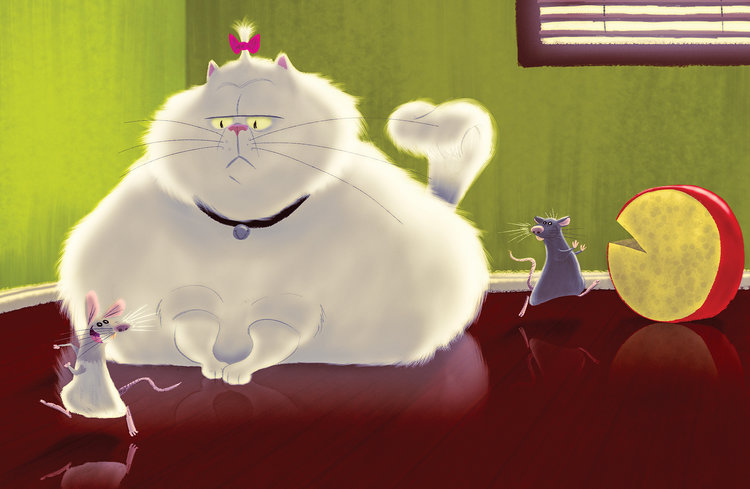 An illustration by John Herzog. Will this be his next 3D print?

Do you also have a favorite character that you want to bring to life?  Once your designs are ready, you can upload them to our 3D printing platform to get an instant quote for your prints.

If you also need help from a professional 3D designer, take a look at the 3D designers on this database.

Gray Resin is the perfect material for creating 3D prints with great surface quality and a high level of detail, and it’s ideal for visual models like figurines. 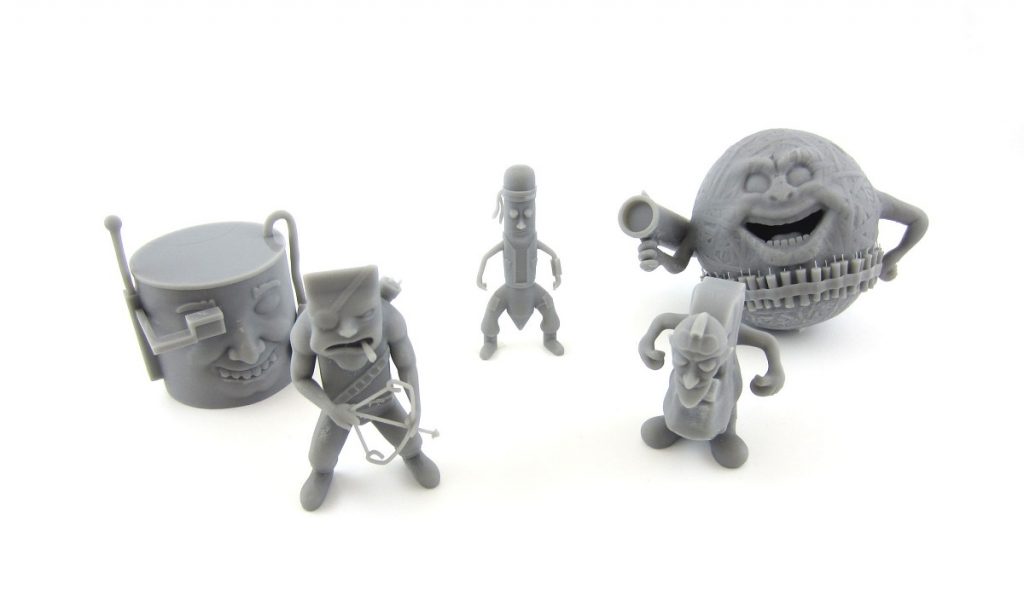 The technology behind Gray Resin is Stereolithography, which you can learn more about 3D printing in resin in this article. Gray Resin comes in a natural finish called “Basic”, or it can be spray-painted in different colors by our production team.

Don’t forget to read our Design Guides carefully before starting to design your 3D model for this resin.