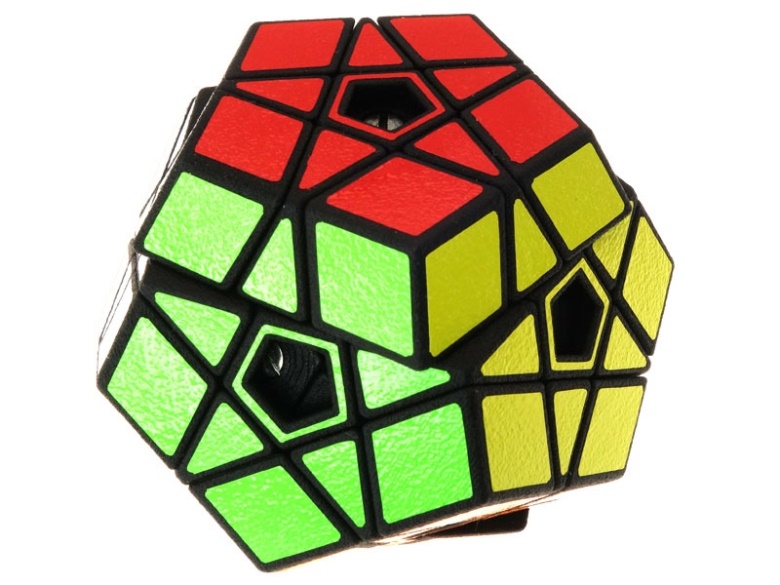 Slice Megaminx is a dodecahedral twisty puzzle where opposite sides are connected via the core. As a consequence, only slice moves can be made. The concept was originally suggested by Bram Cohen. What makes Slide Megaminx special, is that opposite corners always stay opposite, opposite edges always remain opposite, and opposite centers always remain opposite. So if opposite sides are stickered the same color, then the sticker patterns remains point symmetric around the origin, no matter howe far you scramble the puzzle.

The first three prototypes were a failure. The first was Slice Kilominx, and it hardly turned. The second was a Slice Megaminx with five shells of gears. Brandon Enright tumbled and polished the parts, lubricated them and assembled the puzzle. It did not turn at all. The third was a Slice Megaminx with opposite centers being connected by five geared rods going through the center, and one straight connection. Only the straight connection turned, but barely. Apparently, connecting opposite centers does not work, as it pushes edges and corners outwards, jamming the mechanism.

The fourth prototype was a great success. After talking with Andrew Cormier, I tried a shelled mechanism. We considered whether we should have two or three shells. I decided to have only two, as a third shell would make the puzzle much bigger. Also, too many pillars on the sphere core could jam the sliding of the grooves. Instead, I made the most inner pieces double-gripped. The double grip would add length to the pieces, keeping them straight up. The double grip would also reduce the risk of pieces coming loose. I fixed the centers to the core with screws instead of making them an integral part of the core. This turned out to work very well, as it enabled me to precisely tension the puzzle.

The Jaap's Sphere tool was instrumental in the design of this puzzle. I used the tool to select this Jaap's Sphere for the inner core. By moving the slider, the tool reveals how one could have additional shells, like this one, which I decided not to use because of its apparent fragility.

Read at the iMaterialise Forum.

Read more at the TwistyPuzzles Forum.

Please order a 3D-printed do-it-yourself puzzle kit from iMaterialise at this page, or contact Oskar directly if you are interested in of puzzle.

Oskar Puzzles offers mechanical puzzles and objects that can only exist thanks to 3D printing technologies. All designed by M.Oskar van Deventer.