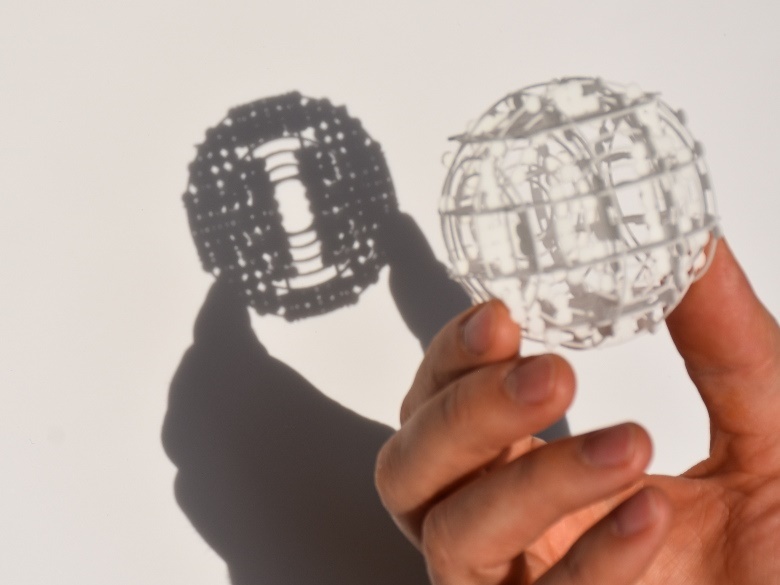 A shadow cloud that depending on illumination casts various shadows. For more info see drzachsuchy.ch/shadow-cloud.

Drzach&Suchy is an art and design studio based in Zurich, Switzerland, specializing in nature-inspired installations with surprising “a­ha!”-­type features. They mix low­-tech observations with high-tech manufacturing processes, and work with a variety of technologies and materials, often pushing them to the limits. Drzach&Suchy have done commissioned work for numerous customers, including Google Zurich (Switzerland), phaeno science center in Wolfsburg (Germany), and Swiss Science Center Technorama, Winterthur (Switzerland). Their works have been featured in the media around the world, various television shows and major design magazines and blogs, including Fast Company, The Creators Project, Discovery News, Inhabitat, TreeHugger, PSFK, Yanko Design, Technergeia.org, designboom, Core77, and many more (see also drzachsuchy.ch/media). Recently they have won Designer of the Year 2015 Award from i.materialize, and their experimental project "Haiku" has won "Honorable Mention" from Fast Company's Innovation by Design Awards 2016.

The latest in 3D printing, delivered to your inbox. Subscribe to our newsletter!
The personal data that you provide us will only be used to process your registration in accordance with our Privacy Policy. You can unsubscribe at any time via a link in our newsletter email or by contacting us.
Thanks for subscribing to our newsletter!
We’ll round up the most relevant updates, news, and deals for you, so keep an eye on your inbox.
3D Printing
Business
Support
Shop
Community
Get Social with Us