Fiction vs. Reality: What 3D Printing Is and How Pop Culture Sees It

Fiction vs. Reality: What 3D Printing Is and How Pop Culture Sees It

I love CSI and its legion of lab coat wearing copies. One of the reasons I like those shows is that science is one of the heroes of these series. I enjoy hearing about new technologies such as tricorder-like scanners, new ways to lift fingerprints and minute trace evidence that can be tracked back to its source.

My only worry is that every time one of these shows deals with a subject that I understand they screw it up. Probably the most famous example is the CSI New York episode where one cast member says she will “create a GUI interface using Visual Basic to see if I can track an IP address.” Believe it, there is a clip right here.

It’s as if someone got the 1997 edition of ‘The Information Superhighway for Dummies’ and randomly strung glossary entries together to form a sentence. This error could have been averted by one phone call placed to most of the people I know.

A 3D Printer in the TV Show ‘Bones’

Recently I watched a Bones episode titled “The Bones that weren’t”, season 6 episode 5. In this episode they discover an impression of a skeleton inside concrete and reconstruct it using 3D printing. If you’re in the States you can see that episode here on Hulu, the 3D printing part is at around ten minutes in. They use what they call an “additive sterolithograph” to 3D print the entire skeleton. I had never heard the term “additive stereolithograph” before but could infer that they meant a stereolithography machine.

The Reality: The Mammoth, One of the Biggest 3D Printers

The machine used is unmistakably a facsimile of the Materialise Mammoth Stereolithography machines. They basically copied and jazzed up our machines for the TV show. You can see a short video of the Mammoths in action here. In an older video below you can see the more of the entire process and the likeness of the machines.

The Materialise Mammoth machines 3D print the largest things that have ever been 3D printed and can build things 2100 by 700 by 800 mm. We use them to 3D print full sized statues, car doors, car bumpers and King Tut. I think the Mammoth’s are amazing and sometimes during breaks I walk into the Mammoth production halls and just watch the machines “grow” parts such as entire chairs.

Whereas I’m happy that script writers in Hollywood know who we are, I was a bit disappointed in the segment. The Mammoth technology is already cutting edge and amazing but not amazing enough for TV apparently. And this is precisely what annoys me, “how is this not amazing enough for you already?” The image below shows you the actual process at work. 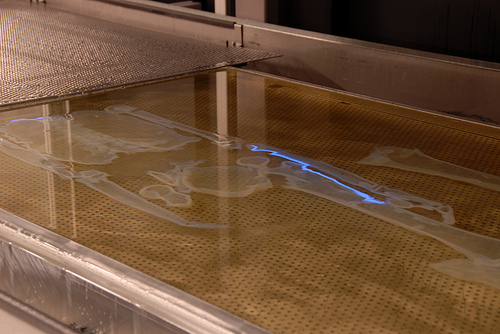 Reality vs. Fiction of 3D Printing

The skeleton was 3D printed in what seemed like ten minutes. Also the lasers used were pink and were solid lightsaber like beams. There is also pink smoke wafting about. Now, I can totally understand that you’d hurry the process up a bit in the interests of the show. I also understand that to show the process, pink solid beams might somehow work better for TV. But, why does there need to be smoke? I’m also puzzled that the skeleton somehow has flexible joints and tendons. Although we can 3D print flexible materials on a Mammoth we can not print them at the same time as we do rigid materials. The only machines that can currently do that are Objet machines and although we have those too, that is an entirely different technology. Also, if the 3D print is based on an impression of a skeleton it is completely unclear to me how this would lead to joints and tendons being printed. The biggest gripe I have is that there is no recoating of the surface of the part. The recoating process adds new layers to the resin bath so that they can be built. This is kind of essential for the whole “growing an object layer by layer” thing. One thing is incomprehensible to me: why is the skeleton 3D printed in blue? Did they like the color better? Why not white?

What We Need To Learn From This

I hope you don’t mind my complaining but in my rant there is an important point. 3D printing is an amazing transformative technology that can right now today do many incredible things. By jazzing it up, TV not only undermines the public’s understanding of technology but also creates expectations that can not immediately be met. This in turn can actually endanger the widespread adoption of a technology because the results however sci fi, pale in comparison with the sexier pink light saber 10 minute TV version of the technology.

If we can’t trust fictionalized forensic science TV shows to give us an accurate science education, who can we trust?