The Ju 388 Project: Restoring the Cockpit of a Rare Warbird from Scratch

The Ju 388 Project: Restoring the Cockpit of a Rare Warbird from Scratch

Dr. Christoph Vernaleken, a physicist from Germany with a doctorate in engineering, has been an aviation enthusiast all his life. Ever since the early 1980s, he’s been fascinated with historic aircrafts after his father took him to visit the ‘Deutsches Museum’ in Munich, the world’s largest museum of science and technology. Now he wants to reproduce the cockpit of a rare WWII warbird himself – with the power of 3D printing.

Dr. Vernaleken is particularly interested in the Junkers Ju 388 L, a high-altitude reconnaissance plane which appeared near the end of the war. The last surviving plane is stored in the Restoration and Storage Facility of the non-public Paul E. Garber Preservation (also known as ‘Silver Hill’), located in Suitland, Maryland, USA. This facility is where the Smithsonian Institution’s National Air and Space Museum restores aircraft, spacecraft, and other artifacts.

With the Ju 388 Project, Dr. Vernaleken wants to reproduce a complete cockpit of this rare WWII plane. At the moment he is doing a feasibility study, with the aim of ultimately providing both museum-quality reproductions, home cockpit equipment and simulation equipment. 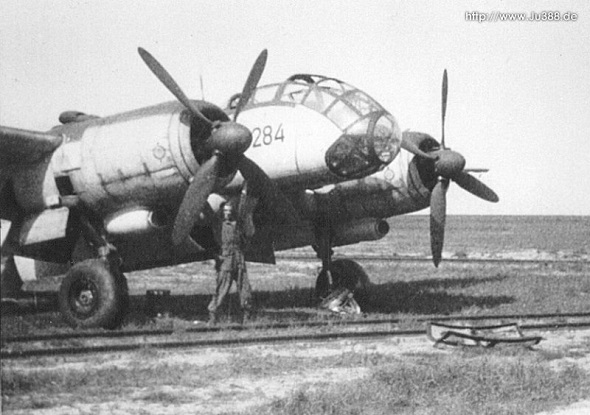 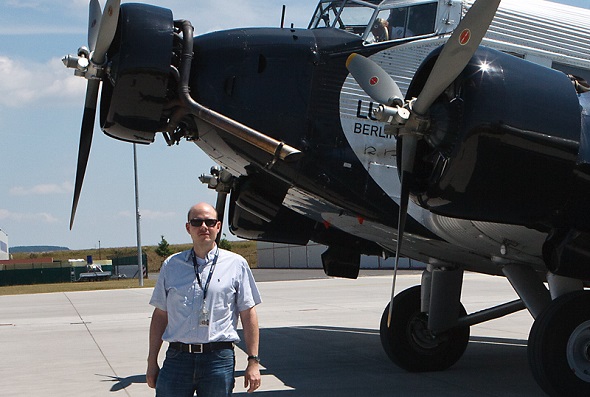 Dr. Christoph Vernaleken has a mission: Restoring the cockpit of a rare warbird

Of course, after finding some reproductions of the Ju 388’s spare parts in our i.materialise shop, we just had to know more about him and his wonderful project.

First of all, what’s your day job?
After seven years of aviation safety and flight deck research at TU Darmstadt, I joined Airbus Defence and Space in 2008, where I have worked in a department dealing with Human Factors Engineering and Flight Deck ever since. In essence, I work on the human-centered design of both novel cockpits and upgrades of existing ones.

When did you become interested in the Ju 388 Project?
My interest in the Junkers Ju 388 started in April 1993 with approximately two rolls of classic 35 mm negative film that I shot in the cockpit of this magnificent aircraft at the Silver Hill storage facility. Subsequently, my dear friend and co-author Martin Handig from Vienna and I realized that there was little useful material published on the Junkers Ju 388, and therefore we decided to write our own book about this aircraft, which has been published with Aviatic in Germany and Schiffer in the U.S. (English edition). Over time, my interest in the aviation technology of the 1930s and 1940s increased, and I therefore started collecting historic aircraft instruments and other equipment. One of my long-term goals would be a reconstruction of the cockpit panels of the Junkers Ju 388 J night fighter, or of the Ju 388 pre-series aircraft, which had a distinctly different instrumentation in some parts of the cockpit.

What is the feasibility study?
The feasibility study that I am conducting at the moment is two-fold in its objectives. First of all, I want to find out whether it is possible in principle to create museum-quality spare parts for historic cockpit instruments and other equipment using 3D printing and other individualized manufacturing techniques/services. The answer is not as simple as it may seem at first glance, since not all of the historic materials are available for 3D printing. The second objective of this feasibility phase is to see whether there is a cost-efficient way of making reproductions for the warbird home cockpit/simulator market.

How long have you been working on this?
I learned about online 3D printing services in 2013 and immediately decided to give it a try using a battered original Bakelite bezel of a cockpit switch panel as a basis for a 3D reconstruction. It is in my shop as Fl 22610 and has “Kompaß / Kreisel” on it. This was honestly my very first attempt at 3D modeling. 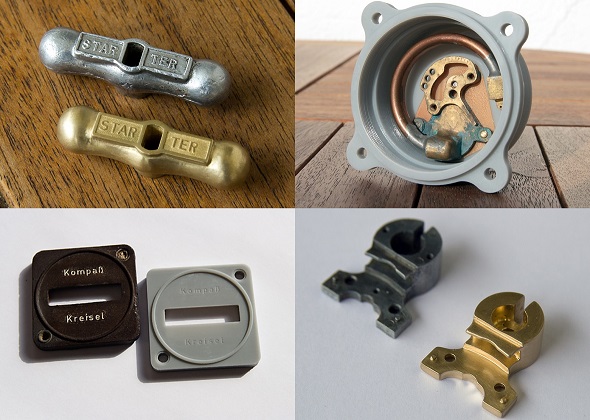 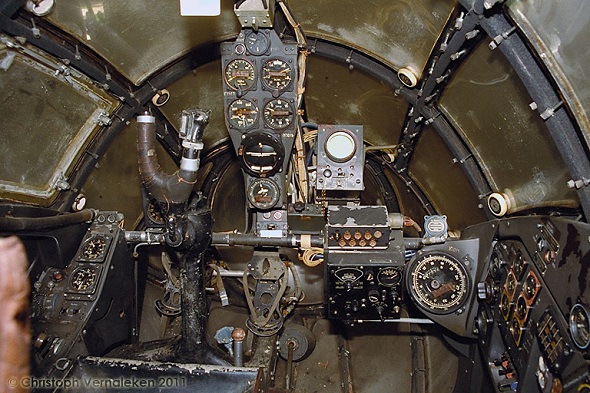 … with the goal of reproducing the cockpit of this WWII plane.

Which 3D software are you using now?
I started with the free version of SketchUp, but I am now using Punch! ViaCAD Pro 9.

While reproducing spare parts for historic aircraft instruments, what is the biggest challenge you face?
Clearly, the biggest initial challenge consists of acquiring either original instruments or suitable drawings as templates for 3D modeling. Then, it is always rather challenging to accurately “chart” the originals with a caliper, since already a few tenths of a mm of error may render the spare part unusable.

And once I am satisfied with my 3D model, I usually make an .STL export and upload it to i.materialise. When I am uncertain about some aspects of the 3D model I created, in terms of accuracy, I usually create a first test print using a “cheaper” material. 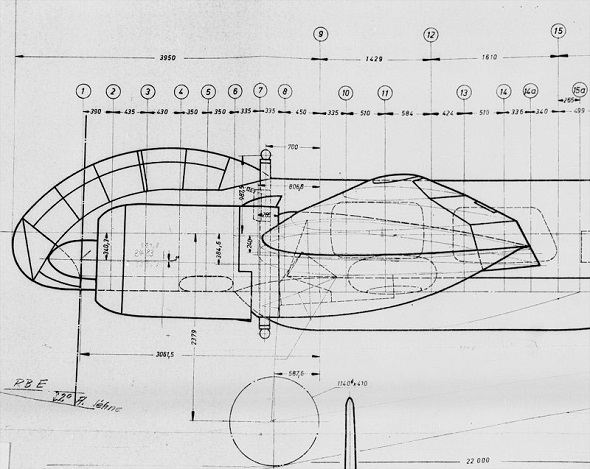 Original parts and documentation about the Junkers Ju 388 are scarce. 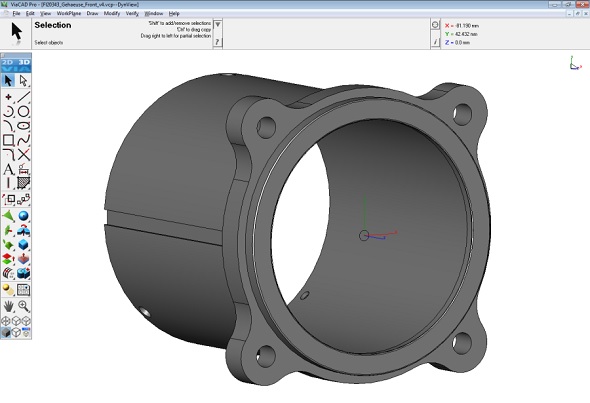 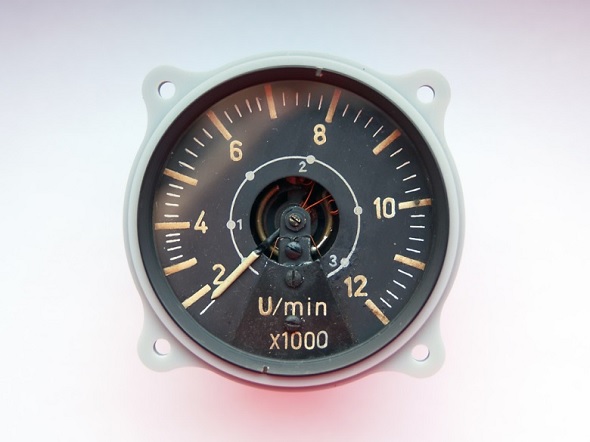 Do you think it would be possible to reproduce these spare parts without 3D printing?
Technically, it would of course be possible since the original items were obviously all produced using classic manufacturing techniques. However, from an economic perspective, unit costs would be astronomically high if molds for casting metal or plastic injection molding would have to be manufactured in the classic fashion. 3D Printing is the only economically feasible way of creating reproductions of cockpit parts which were originally cast in metal or created from historic plastic materials such as Bakelite in small numbers.

What value does 3D Printing add to the Ju 388 project?
It is a key enabler. Gray Resin for instance is sufficiently detailed for the reproductions of bezels with engravings and instrument casings, whereas Polyamide is not suitable for cockpit parts with engraved letters.

You can find more info about this exciting project on Dr. Vernaleken’s website. Are you also a history enthusiast re-creating artifacts with the power of i.materialise’s 3D printing service? Then tell us about your story!