How to Create Stunning Polyamide (SLS) Prints as a Beginner

How to Create Stunning Polyamide (SLS) Prints as a Beginner

Polyamide (SLS) is the material that offers the most freedom of design for 3D printing. It’s also the material that can be finished in the most colors. But sometimes, this is not enough to create the 3D prints of your dreams. That’s the case of Brian Wise, a 3D printing beginner who successfully finished his first 3D-printed project, from sketch to painted 3D model.

Brian Wise recently graduated from college in Philadelphia with a degree in architecture and has been working as an architectural designer for a year and a half. He has enjoyed drawing and modeling since childhood. That’s why it’s no surprise that his design for a boat started with a sketch.

In this interview he explained to us what process he followed to finish his first 3D print and how he painted the printed model to match it with the ideal design he had in mind.

We see that you mainly work with illustrations. Why did you decide to 3D print a model of the boat?

When I was in school, our final design studio had access to a 3D printer, but due to the direction my project went, I was unable to really do anything with it, which felt like a huge missed opportunity.  Now that I’m out of school, I’ve found that I have much more free time with the absence of classes, but have lost the creative outlet that our design studio provided.

I tried my hand at a few miscellaneous crafts before starting to get really interested in the idea of 3D printing. Of course, the possibilities of 3D printing are endless, so the process of bringing a 2D drawing to life gave me some focus for this experiment. 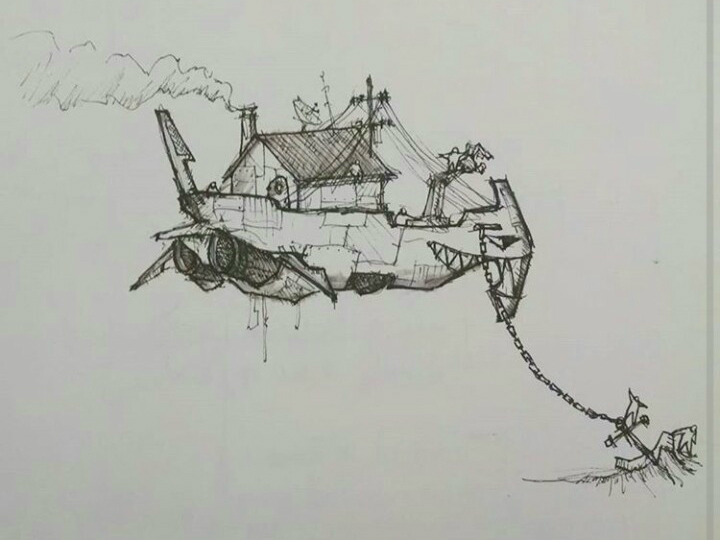 Is this your first experience with 3D printing?

This is indeed my very first print. I looked heavily into acquiring my own 3D printer but was hesitant to purchase plastic-based printers due to wanting to really engage in fine detail and their tendency to visibly layer; and I was unable to afford alternative resin-based printers. Luckily the team at i.materialise was also particularly accommodating. 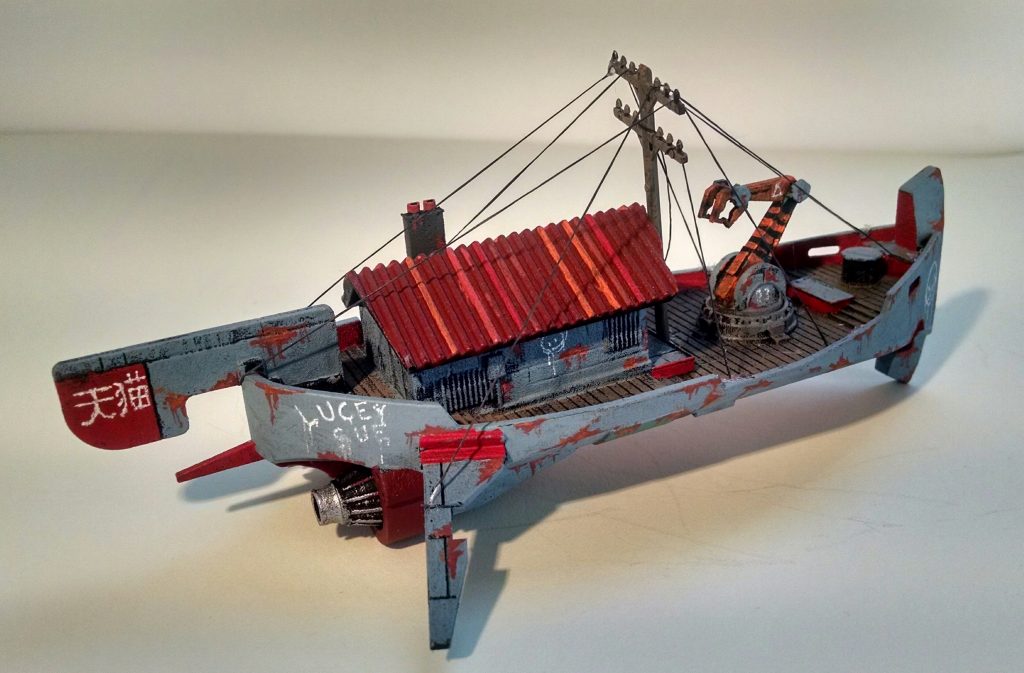 What was the inspiration behind the design of the boat?

The process was rather long, though fairly straightforward. It began as an idle sketch while I was in the studio one day, inspired by the exceedingly talented Ian McQue and his fantastical flying boat and industrial paintings. The drawing sat in my sketchbook for over a year until post-graduation, when I became interested in 3D printing. I selected it after scrolling through my old Instagram posts to find an interesting object that I could reasonably model. Over the course of the next week, I 3D modeled it before sending it out to print.

Which program did you use for the 3D design?

The design was modeled in Rhino 5.0, which I had used heavily and been instructed in as a student for Architectural Visualization, and subsequently purchased only to have it sit around unused on my computer after graduating. 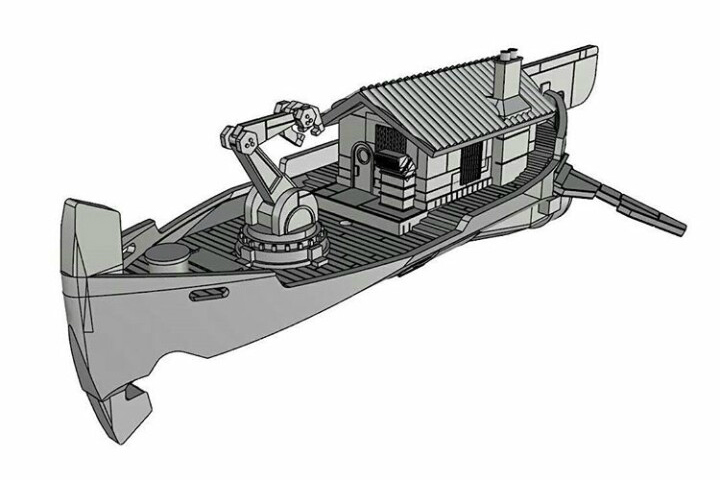 Which material did you use and why?

I ended up printing the model in polished polyamide (SLS). I certainly didn’t have an excess of money to throw around for a hobby venture like this and was initially discouraged to the point of shelving the project after seeing some of the prices at other websites. Luckily, Polyamide was affordable, allowed for a good level of fine detail, and true to its description on the site was forgiving for a beginner in 3D printing like myself who doesn’t really have a feel for the intricacies of modeling for print. The option of the polished surface was a nice bonus to help reflect the smooth hull of the boat. 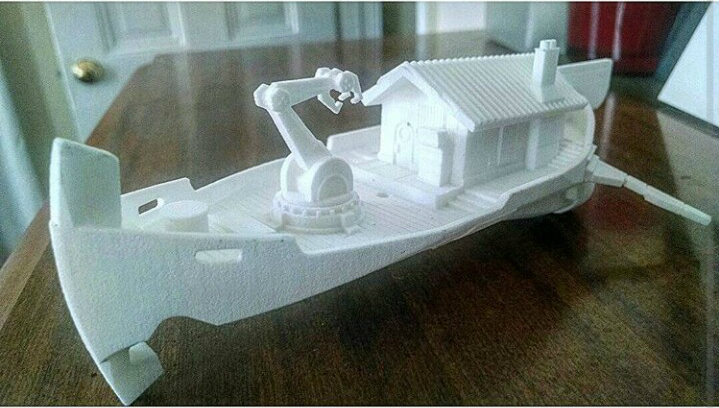 How did you paint the 3D-printed model?

I first coated the model with black spray paint and then used hobby model paints to finish it. Since I had the model printed as one solid block, it was difficult to get into nooks and crannies or to highlight details (something to keep in mind for the next 3D print). By using dry-brushing over the black undercoat, the corrugations, seams, and other tiny details were able to be preserved. 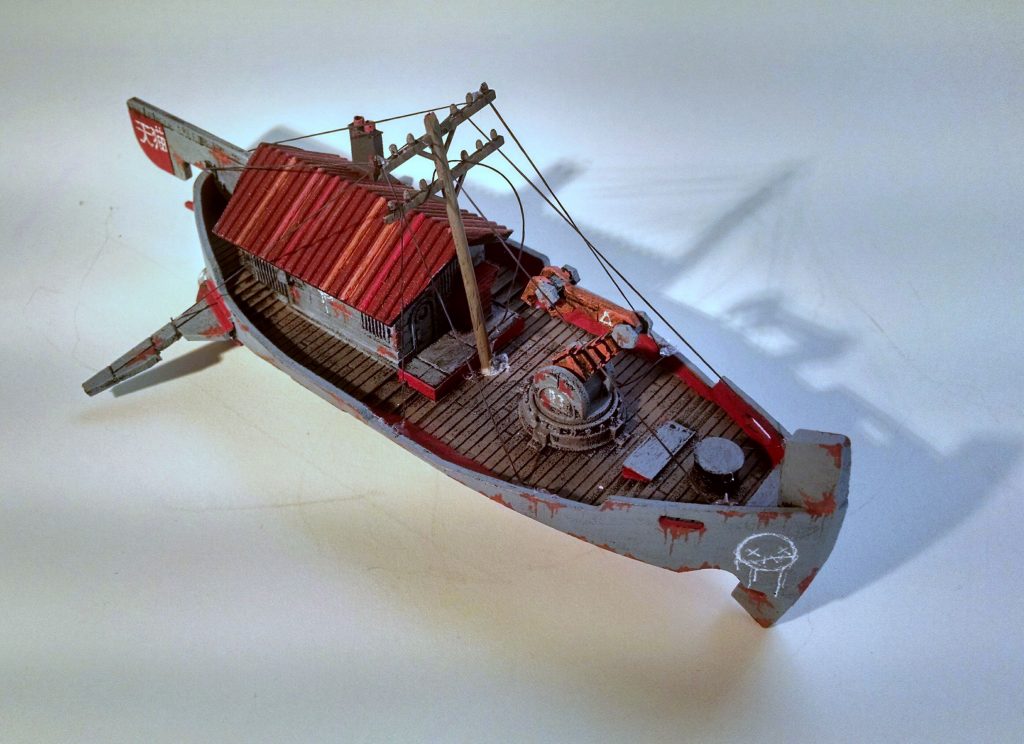 After the solid blocks of color were applied, the fine details were added such as rust and striping.  Lettering and graffiti were applied with a white gel-pen. Aside from the gel-pen, all the painting materials were from Game Workshop’s Citadel Paints, which I had used before on miniatures when I was younger.

Some of the aspects too small for 3D printing, such as the telephone pole mast and rigging, were sourced from Model Train hobby companies and added after painting.

Do you have any other 3D-printed projects for the future?

Ever since I started getting into the idea of 3D-printing, I’ve had more ideas than I can list, from scale models like the boat, to jewelry. The joy and possibility of bringing a rough idea from 2D to being able to hold it in your hand is amazing. I would love to begin looking into i.materialise’s ability to print interlocking parts to start bringing some movement and life to these creations. I certainly have plenty of sketches to choose from! 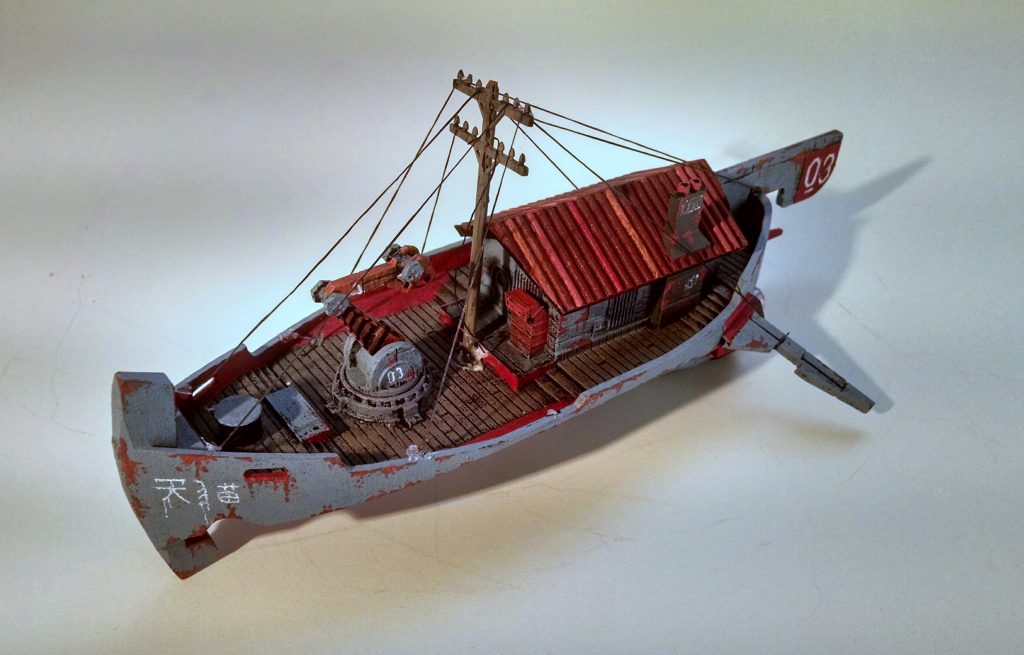 We hope that this interview inspires you to 3D print your ideas. As you can see, even a doodle can become a stunning 3D-printed piece with the right tools and 3D printing technology. If you are 3D printing on a budget like Brian, you can upload your models to our 3D printing platform once they are ready and get an instant price quote for your prints in different materials.

When you’re ready to let your own designs set sail, simply upload your 3D model to our online 3D printing service and choose from lots of high-quality materials, colors, and finishes.

We love seeing what our community gets up to. Tag us on social media with #imaterialise for a chance to get featured!